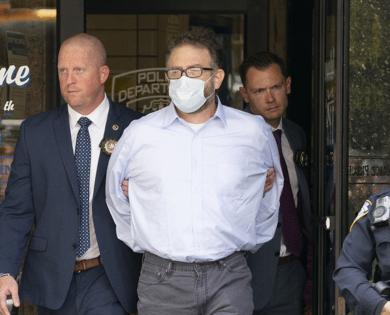 Dorothy Hirsch, 62, was charged with gun possession after cops raided the 84th Road residence where she lives separately from her husband, the accused killer of Chinese delivery man Zhiwen Yan.

Cops recovered eight guns hidden around the home along with more than 200 rounds of ammunition, court records show. Some of the guns were loaded, the records show.

Meanwhile, a .38-cal revolver, a .357-caliber revolver, a 9-mm pistol and a .25-caliber pistol were found in a black zippered pouch. The same pouch contained the rest of the ammunition.

Dorothy Hirsch’s lawyer Mark Bederow said she is “adamant” about her innocence and plans a vigorous defense.

“She herself was initially held for $150,000 bail, a registered nurse who was never arrested, who maintains a separate residence,” said Mark Bederow, Dorothy Hirsch’s lawyer. “She’s not going to be used as a pawn in a case against him.”

Bederow suggested that Glenn Hirsch stashed the guns in his wife’s home without her knowledge.

“In order to be found guilty, one must be proven to knowingly possess the firearms,” he said.

Prosecutor Karen Ross on Monday said DNA was found on two of the guns, and Glenn Hirsch agreed at the prosecutor’s request to be tested to see if the DNA matches him.

Authorities say Glenn Hirsch shot and killed Yan April 30 after following him on a delivery run from the Great Wall restaurant on Queens boulevard where Yan worked.

Hirsch was arrested June 2 and on Monday was released on $500,000 bail. Detectives learned that the violence began brewing Nov. 30 when Hirsch became angry because he didn’t get more duck sauce with his takeout order.

He had been stalking Yan and other staff at the restaurant on Queens boulevard for weeks before the shooting.