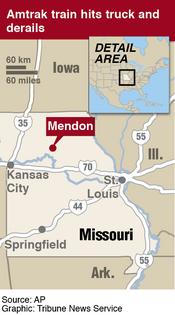 LOS ANGELES — Three people were killed and at least 50 others injured when an Amtrak train headed from Los Angeles to Chicago crashed into a dump truck Monday afternoon in Missouri, officials said.

Two of those killed were on the Southwest Chief train, and the other was in the truck, said Cpl. Justin Dunn of the Missouri State Highway Patrol.

About 12:42 p.m., the train, carrying at least 243 passengers and 12 crew members, struck a dump truck that was obstructing a public crossing southwest of Mendon, Missouri, officials said. The collision derailed eight cars and two locomotives.

The crash took place at an uncontrolled crossing where the BNSF Railway tracks meet a gravel road. The crossing had no electronic signals to warn traffic, which is common for the area, Dunn said.

At least 50 people were injured and there were “multiple fatalities” after the crash, according to Eric McKenzie, director of the Chariton County Ambulance District, which operates near Mendon. He said he was unable to confirm the number of people who had been killed.

Dozens of patients from the crash site began to stream into local hospitals, and some were airlifted in critical condition, officials said.

Ben Cornelius, a spokesman for Boone Hospital in Columbia, said in an email the facility is expecting 30 patients in the next 30 to 90 minutes.

Mendon is about 84 miles northeast of Kansas City.