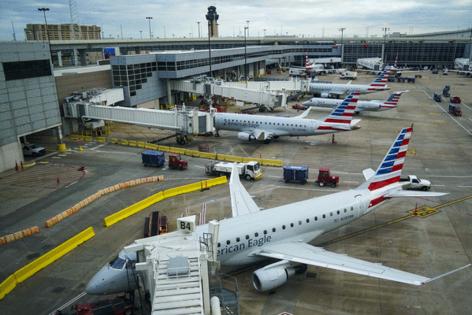 CHARLOTTE, N.C. — A possible odor aboard an American Eagle flight forced the plane to stop on the taxiway at Charlotte Douglas International Airport on Monday morning, airline officials said.

The aircraft was stopped shortly after 9:30 a.m. local time due to the potential odor in its cabin, American Airlines spokesman Andrew Trull told The Charlotte Observer. Passengers were asked to deplane through boarding doors onto the ramp, he said.

Buses took the passengers back to the terminal where they are expected to board another aircraft for their flight to Melbourne, Florida, Trull said.

Emergency crews responded to the regional aircraft, but there was no impact to airport operations, Charlotte airport officials said.

The plane, a twin-engine Canadair Regional jet (CRJ9), arrived from Birmingham, Alabama, and was preparing for takeoff for Melbourne-Orlando International Airport in Florida, according to tracking site FlightAware. PSA Airlines, a subsidiary of America, operates the flight.

None of the flight’s 60 passengers and four crew members were injured, Trull said.

“We thank our customers for their patience and our flight crew for their efforts to ensure the safety of all those on board,” he said.