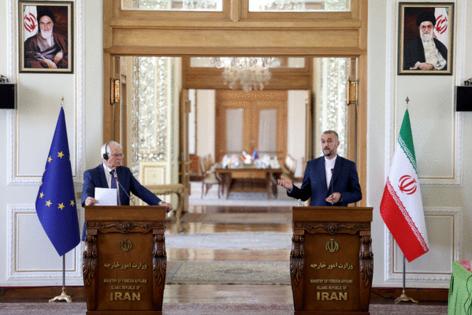 Iran’s chief nuclear negotiator and his U.S. counterpart are heading to Doha, Qatar in the latest attempt to revive the 2015 nuclear deal and end a months-long standoff that has inflamed tensions in the oil-rich Persian Gulf.

Ali Bagheri Kani will travel to Doha on Tuesday in order to “negotiate the removal of sanctions on Iran,” and the talks will resume that day, the state-run Islamic Republic News Agency reported. A U.S. State Department official, who asked not to be identified, confirmed the talks are restarting this week.

Robert Malley, the U.S. Special Envoy for Iran, was already on his way to Qatar on Monday, according to people familiar with the matter, who discussed the negotiations on condition of anonymity.

Both sides tempered their optimism and put the onus on the other.

“We’re hopeful that in the latest round of talks we can reach the final point of an agreement provided that the U.S. and European countries are realistic in their behavior,” Iran’s Foreign Minister Hossein Amirabdollahian told reporters at a news conference in the Turkish capital Ankara on Monday.

The State Department official said a deal is within reach if Iran doesn’t ask for concessions that go beyond the parameters of the original nuclear accord that then-President Donald Trump abandoned in 2018. .

The pact, known as the Joint Comprehensive Plan of Action, placed strict controls on Iran’s nuclear activities in exchange for the lifting of sanctions, including easing restrictions on the OPEC producer’s oil exports. Reviving it may lead to more Iranian crude sales and help lower prices, which have surged 45% this year to about $110 a barrel.

The negotiations have dragged on for more than a year, even as energy and food prices have surged globally. Russia’s war on Ukraine is driving fear of famine in many countries, and high inflation is stalking the richest economies.

The 2015 agreement unraveled, with dramatic consequences for Iran’s economy and domestic politics, after Trump withdrew from it and imposed a much tougher sanctions regime on the Islamic Republic. Tehran significantly expanded its nuclear activities in response, exceeding the limits on uranium enrichment spelled out in the accord. The International Atomic Energy Agency censured Iran this month for failing to cooperate with its investigators.

The bid for new momentum comes as the Group of Seven nations meet in the Bavarian Alps, where officials also discussed the multinational nuclear accord. A senior French presidential official said on the sidelines of the summit that Iran and Venezuela should be allowed to return to oil markets to help stabilize prices, describing U.S. sanctions on energy exports as a knot that needs to be untied.

The talks in Doha will involve the European Union mediating between envoys from Tehran and Washington, and they follow a visit to the Iranian capital by the E.U.’s top diplomats where they said on Saturday that the negotiations will resume within days and take place in a Persian Gulf state.

The negotiations stalled in March after about a year of discussions in Vienna, where the original deal was sealed seven years ago. Officials have said that a few key issues remain unresolved between Tehran and Washington, including a Trump-era terrorism designation for Iran’s elite military branch, the Islamic Revolutionary Guard Corps.