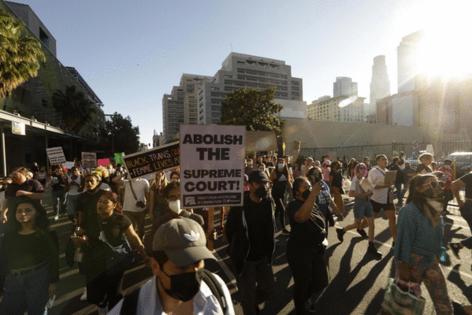 A 30-year-old Los Angeles man has been jailed on a charge of attempted murder after being accused of injuring an L.A. police officer with a makeshift blowtorch during protests over the U.S. Supreme Court's reversal of the Roe vs. Wade decision.

Michael Ortiz was arrested Friday night on suspicion of attacking the officer at 5th and Main streets downtown. He remained in custody Sunday with his bail set at $1 million, according to the Los Angeles County jail website.

The officer, whose name was not released, was treated for burns at a hospital and released, the Los Angeles Police Department said. The department provided no further details on the weapon that was allegedly used.

In total, four officers were injured by projectiles and fireworks during the demonstrations over the Roe ruling, which threw out the constitutional right to abortion, the LAPD said.

"I condemn the violence against officers," Police Chief Michel Moore said in a statement. "... Individuals participating in such criminal activity are not exercising their 1st Amendment rights in protest of the Supreme Court decision, rather, they are acting as criminals. The department will vigorously pursue prosecution of these individuals."

The police arrested another demonstrator, 23-year-old Juliana Bernado, on suspicion of resisting arrest after she was accused of trying to grab an officer's baton, according to the LAPD. She was taken into custody after one or more officers fired a "less lethal," hard-foam round at her, the department said. Bernado, of Valley Village, was released from jail on a $25,000 bond, according to the county jail website.