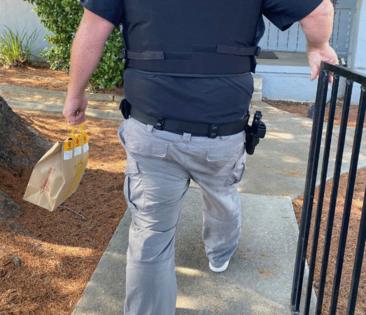 The Placer County Probation department announced in a news release posted to social media on Saturday that Officers Wilson and Robles —both probation officers in the department, who were only identified by their last names — located a person who had failed to comply with the conditions of his release.

When officers arrested the man, he was in the process of delivering a DoorDash order from McDonald’s by car. Wilson, who the release said “never leaves a job unfinished,” completed the delivery order himself after the man had been taken into custody.

Anshu Jain, Cantor Fitzgerald’s president who was known for his time leading Deutsche Bank traders into the lender’s investment banking heights, died five years after being diagnosed with duodenal cancer. He was 59.

Hundreds of Mexican military troops were flown into Tijuana on Saturday to beef up street patrols after armed gangs hijacked and burned at least a dozen vehicles in the border city, the latest in a wave of attacks hitting ...Read More

William “Marty” Martin, a renowned snake researcher who dedicated his life’s work to the study of timber rattlesnakes, died last week after he was bitten by a snake on the property of his West Virginia home, his wife...Read More

A Connecticut teen was accidentally shot by his father Friday afternoon as the older man was instructing him about guns, according to authorities.

Police said that the 17-year-old, whose name along with his father’s was...Read More