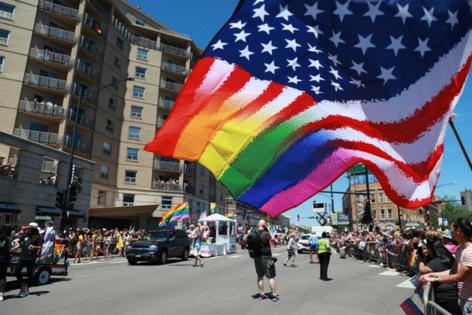 Thousands packed the streets of Houston, New York, Chicago and other cities around the country this weekend to bask in pride and show their support for the LGBTQ community, determined to protect hard-won rights amid concern they’re suddenly under threat.

The events, while still full of boisterous celebration, took on a new tone days after the Supreme Court struck down the right to abortion. The decision — and particularly a concurring opinion from Justice Clarence Thomas that questioned the right to same-sex intercourse and marriage — cast a pall over the previously planned events.

“It was definitely a punch in the gut,” said Travis Torrence, 41, the Grand Marshall of the Houston Pride Parade and a lawyer at Shell Plc. He found solace, though, in words from one of the city’s beloved native daughters.

“Beyonce came out with a song this week and she says, ‘You won’t break my soul,’” he said. “I feel like that is our theme for this year.”

Revelers undeterred by temperatures approaching 100 degrees in Houston danced in the street to blaring pop, hip-hop, reggaeton and ranchera music. For many in the crowd, the high court’s decision last week underscored the importance of building community and rallying for action.

Lesbian, gay, bisexual, transgender and other queer Americans are confronting fresh worries about their rights after decades of progress brought an end to laws forbidding sodomy and established marriage equality nationwide. Amid recent efforts in Texas and elsewhere to criminalize some treatments for transgender children, the potentially swift reversal in rights suggested by Thomas’ opinion was another wake-up call to many in the LGBTQ community.

One marcher, wearing a shirt reading “Hella gay,” led a “my body, my choice” chant.

The mood wasn’t all dour, though. Cheering attendees wore all manner of rainbow-colored clothing, from knee socks to tutus, and waved “Born this way” flags, with some signs protesting the curtailment of abortion rights sprinkled in among the milieu.

“I was honestly expecting it to be more protesty and less paradey,” said Anna Segarra, 31, who works in finance.

“The news on Friday was an attack,” Segarra said. “When you start to take away civil rights, everyone’s rights are at stake.”

Also in attendance at the parade were New York politicians, including Gov. Kathy Hochul and Mayor Eric Adams.

“I just hope they don’t overturn same-sex marriage, because we heard that’s coming next,” Smith said. “We love each other. Why can’t we get married?”

Meg Parks, a 46-year old mother of five who identifies as queer, was attending her first parade in Houston.

“I kind of needed it more than other years,” she said. “I feel like we moved 50 years backward.”