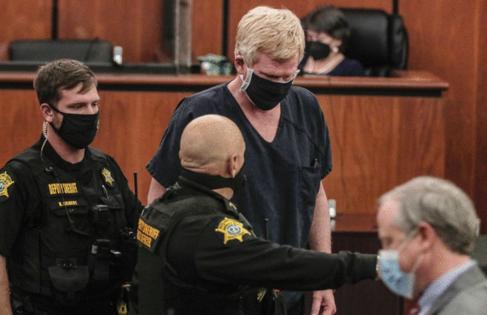 “He’s got to make it a full-time job,” Murdaugh told his brother, John Marvin Murdaugh, in a phone call in late December. “He’s got to study five and six hours every day, six days a week.”

That discussion is among more than 100 recorded phone conversations of the jailed Murdaugh talking to relatives he remains closest to. The conversations, recorded late last year and early this year, depict Murdaugh’s sometimes painful adjustment to the tense monotony of jail life.

One subject repeatedly came up: Getting Buster, now 26, back into law school. Buster Murdaugh had not been allowed to return after his first year, due to what court records show were low grades and reported plagiarism.

Dozens of jailhouse tapes contain snippets of conversations showing an incarcerated father’s quest to get his son back in the first stage of a legal career by offering tips and how he used a high-powered lawyer to quietly convince law school officials to give Buster another chance.

During the telephone calls from jail, Murdaugh urged Buster to chat up law school administrators and to keep touching base with Karl “Butch” Bowers, the prominent lawyer the family had paid $60,000 to help Buster behind the scenes.

Ultimately, the effort failed — at least for the time being — for reasons that aren’t completely clear.

It remains to be seen whether the Murdaughs will keep trying to get Buster back into the USC law school.

Getting Buster back into USC’s law school was important to Alex Murdaugh.