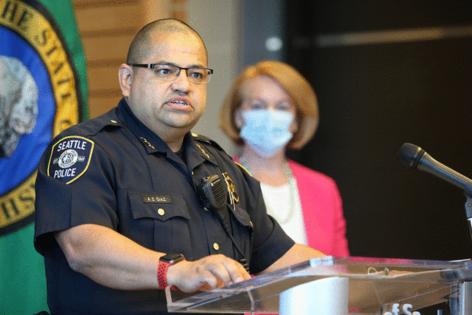 Diaz's letter comes after the Seattle Pride board of directors said any police officers marching in the parade must do so out of uniform. In explaining their decision, the board referenced the criminalization of LGBTQ+ people and the community's history of distrust with law enforcement.

The board noted protests against police violence marked the start of the Pride movement 53 years ago, referring to the Stonewall Riots. Pride parades around the country are held on the last Sunday in June in remembrance of that watershed moment in the LGBTQ+ rights movement.

Diaz called the decision "especially hurtful because other city workers will be allowed to participate in uniforms or insignia that identify their department, but not SPD."

Uniformed police officers will staff Sunday's parade as a public safety measure. Seattle Pride contracts with private on-site security, but will continue to work with Seattle Police as required by the City for large, permitted events, the organization said.

"This is an especially crucial time for all of Seattle to see SPD officers who are out and proud LGBTQIA+ members because the department would like to hire hundreds of officers in the next few years," Diaz wrote. "Our visible presence at the Pride Parade shows the department is diverse and welcoming to all."

Seattle Pride responded to Diaz's letter Wednesday, expressing disappointment he did not wait until after the event to share a public response.

"By opting to post this letter on Twitter and to the SPD Blotter, the SPD effectively put a spotlight on the LGBTQIA+ community for those who share ideologies with hate groups, and is inviting a repeat of targeted threats and violence against our community as we prepare for our first in-person celebration in three years," the organization said.