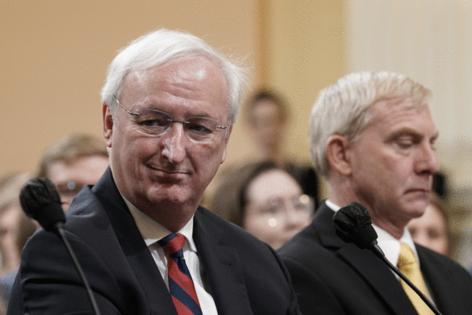 WASHINGTON — The fifth hearing of the House select committee investigating Jan. 6 focused Thursday on how then-President Donald Trump sought to misuse the Justice Department to convince states and the courts that there was widespread election fraud.

Led by Rep. Adam Kinzinger, R-Ill., alongside committee Chair Bennie Thompson, D-Miss., and Vice Chair Liz Cheney, R-Wyo., the hearing featured testimony from top Justice Department officials who detailed Trump’s exhaustive effort to get the department to embrace internet conspiracy theories, and explained how close the president came to installing atop its ranks an official whose primary qualification was his fealty to Trump.

Here are some key takeaways from the hearing:

Several Republican members of Congress sought presidential pardons before Trump left office, moves that suggest elected officials who embraced and perpetuated the so-called Big Lie had at least some concern that their involvement could land them in legal trouble.

In a Jan. 11 email obtained by the committee, Rep. Mo Brooks, R-Ala., recommended “pursuant to a request from Matt Gaetz” that Trump “give general (all purpose) pardons” to “every Congressman and Senator who voted to reject the electoral college vote submissions of Arizona and Pennsylvania.”

“The general tone was, ‘We may get prosecuted because we were defensive of, you know, the president’s positions on these things,’” former White House lawyer Eric Herschmann told investigators in a taped deposition. “The pardon that (Gaetz) was discussing requesting was as broad as you can describe from the beginning of time up until today for any and all things.”

Rep. Jim Jordan, R-Ohio),also talked about pardons, according Cassidy Hutchinson, a former aide to White House Chief of Staff Mark Meadows. But Jordan never asked her about a pardon for himself, Hutchinson told investigators.

“It was more for an update on whether the White House was going to pardon members of Congress,” she said.