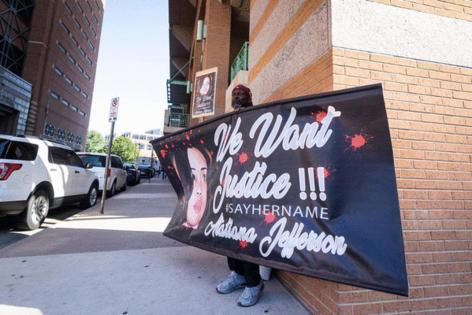 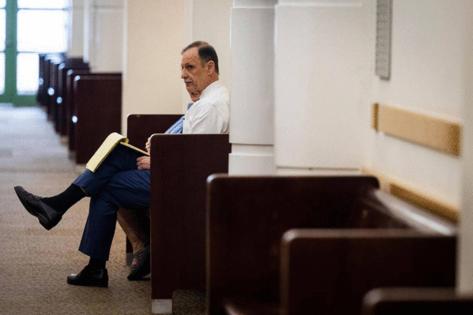 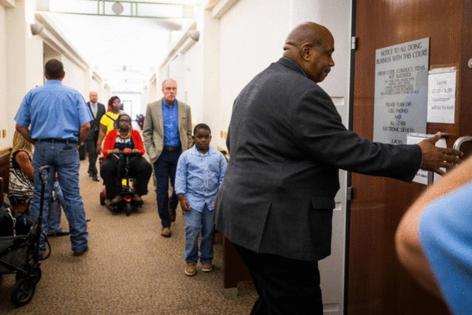 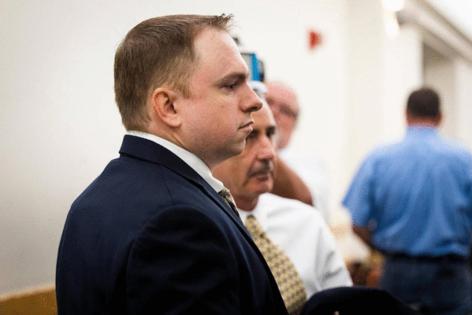 FORT WORTH, Texas — Sitting in the leather swivel chair normally occupied by the judge whose future involvement in a case she will determine, a former state appellate court justice heard again and again Thursday about matters of demeanor, fairness and vacation calendars.

On a bench ledge below Retired Second Court of Appeals Justice Lee Gabriel is the nameplate of the state district judge who defense attorneys in the murder case are seeking to recuse.

Gabriel will determine whether grounds exist to keep the Aaron Dean case under the dominion of Hagerman or assign it to a different judge.

Hagerman’s style — strict, demanding, easily perturbed — was described on Thursday by a series of criminal defense attorneys who have tried cases before him.

On the day the murder trial of Dean — a former police officer who shot a woman in her Fort Worth home — was set to begin, the name of the defendant scarcely has been mentioned. The name of the woman he fatally shot, Atatiana Jefferson, was not said at all.

Instead, the hearing Thursday is focused on whether the judge who has overseen two years worth of court proceedings should be removed from the case.

At 9 a.m., the courtroom was filled with reporters, Jefferson’s relatives, activists and other spectators. Tarrant County Criminal District Attorney Sharen Wilson sat in the back row.

Last week, Dean’s defense attorneys filed a motion asking for a new judge to oversee the capital murder case. In the motion, attorneys Bob Gill and Miles Brissette said Hagerman has shown he is biased against them and has been aggressive during proceedings.

The defense plans to call 11 witnesses to support its arguments that Hagerman has been unreasonable and that his demeanor suggests the judge will not be objective during a trial.

With the first few witnesses called Thursday morning, Gill focused on Hagerman’s refusal to move the trial — which had been set to start on June 23 — to honor Gill’s vacation request.

Prosecuting attorney Dale Smith pushed back on this premise, pointing out Hagerman has granted multiple motions from defense attorneys to move the trial to suit their schedules and case readiness.

In a June 3 hearing, Hagerman appeared frustrated with the proceedings, which focused on Gill’s motion to resolve scheduling conflicts. Gill had previously filed a vacation request for June 29 to July 1, and he argued with Hagerman that the Dean trial would not be completed by that time. Hagerman asked if Gill was filling a motion for continuance, and Gill said he was not. Gill — who is a former judge — and Hagerman went back and forth throughout the June 3 hearing.

Hagerman did not technically deny Gill’s vacation request, nor did he explicitly say Gill would not be able to go on vacation. When Gill asked about his formal vacation request during the June 3 hearing, Hagerman said the court would figure out the conflict at the time of Gill’s vacation, and would work through weekends to get the case done swiftly. Gill seemed skeptical the trial would be wrapped up by then.

Rose Anna Salinas, a former president and current board member with the Tarrant County Criminal Defense Association, was one of the witnesses called Thursday morning. Salinas said she attended the June 3 hearing after she heard concerns about Hagerman potentially not following local rules. She said she was “shocked” by Hagerman’s tone and his “extremely hostile” attitude toward the defense attorneys.

“I could see the bias. I could feel the bias,” Salinas said.

Salinas said she believes Hagerman’s antagonism toward the defense could “lead a jury to believe that he wants a conviction, that he is the third prosecutor in this courtroom.”

Salinas said her primary interest is not in the Dean case, but instead is in the interest of a judge potentially being biased and hostile toward defense attorneys.

“I hate to use the term bullying,” Carter said, “but It was like ‘sit down, shut up, we’re going to have this case on this day.’”

Smith questioned Carter, who has been an attorney in Tarrant County since 1972, about whether he was personally interested in the June 3 hearing because he may be concerned about his own future vacation time being honored by judges.

“If one judge ignored vacation letters, it might happen to you?” Smith said to him.

Hagerman has moved the trial three times previously — twice to grant motions of continuance from the defense. The trial was also delayed in January because defense attorney Jim Lane is seriously ill and could not participate in the case.

Gill questioned another witness, Fort Worth attorney Mark Daniel, about the rules surrounding vacation time. Daniel said local rules allow attorneys to take vacation if they have put in a formal request, as Gill did, and he had never known a judge to defy those rules. Daniel said the news spread through the Tarrant County courthouse “like wildfire” that a vacation request might not be honored.

Prosecuting attorney Ashlea Deener questioned Daniel about his additional knowledge of the case, and implied all the information he has received about the case has come from Gill. She pointed out Carter did not know for a fact that Hagerman would not have allowed Gill to go on vacation, and he did not know what rulings Hagerman has made throughout the rest of the case.

“No personal knowledge about this topic?” she asked.

Prosecutors noted that Hagerman invited Dean’s defense attorneys to renew a change of venue motion to move the trial out of the county once jury selection is underway if it became clear that too many prospective jurors are tainted.

But because jury prospects, after listening to prosecutors ask questions of other potential jurors, often understand that they must say they will consider only the evidence presented, a venue change motion at that point is “about as valuable as a warm cup of spit,” Daniel testified.

Hagerman is known for being strict and “he can be rude to everyone” at times, another witness, Harmony Schuerman, said. She noted she personally likes and respects Hagerman, but she was concerned about the aggression he showed against defense attorneys on June 3.

“He’s what we would generally consider to be an equal opportunity kind of guy. He’s just kind of irritable at times,” Schuerman said. “This was not that. There was just a lot of animosity. There just is no comparison.”

The hearing is expected to continue at least into Thursday afternoon.

A grand jury indicted Dean on a murder charge after he fatally shot Jefferson, a 28-year-old Black woman, through a window at her home in October 2019.

Jefferson’s neighbor James Smith had called the police and asked for a welfare check on her house because the front door was open. Dean and another officer parked around the corner from the home and went into the back yard.

Inside, Jefferson was playing video games with her 8-year-old nephew when she thought she heard a prowler in the yard. She grabbed a handgun from her purse and pointed it toward the window, according to an arrest warrant affidavit supporting Dean’s arrest.

Dean, who is 37 and white, did not identify himself as a police officer and shot Jefferson within seconds of seeing her through the window, according to body-worn camera video. He resigned from the police department the same day he was arrested, two days after the shooting.

WASHINGTON — Spending by the cryptocurrency lobby hit a record high last quarter, as members of Congress from both parties and chambers proved willing to engage with the industry’s top priorities.

The industry and its...Read More

The agencies had worked with the Metropolitan Water District of Southern ...Read More