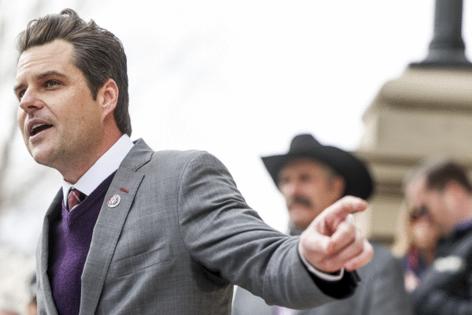 WASHINGTON — Reps. Matt Gaetz of Florida and Mo Brooks of Alabama were among a handful of Republican members of Congress who sought pardons for their actions in connection with President Donald Trump’s efforts to overturn the results of the 2020 election, according to testimony from former White House officials made before the committee investigating the Jan. 6, 2021, Capitol insurrection.

Brooks sent a letter on Jan. 11, 2021, to the White House at the request of Trump and Gaetz asking for a blanket pardon for everyone who voted to reject the electoral college submissions from Arizona and Pennsylvania.

Hutchinson also noted that Patrick Philbin, the deputy counsel to the president, told her that Rep. Marjorie Taylor Greene, R-Ga., asked for a pardon.

John McEntee, the former director of the White House presidential personnel office, also testified that Gaetz told him to ask Meadows for a pardon.

“The only reason I know to ask for a pardon, is because you think you’ve committed a crime,” said Rep. Adam Kinzinger, R-Ill.

“I’ve decided that I should be on the pardon list, if that is still in the works,” he wrote in an email to fellow Trump lawyer Rudolph W. Giuliani after the Jan. 6 attack.

“The notion that I ever sought a Presidential pardon for myself or other Members of Congress is an absolute, shameless, and soulless lie,” he tweeted on June 10.