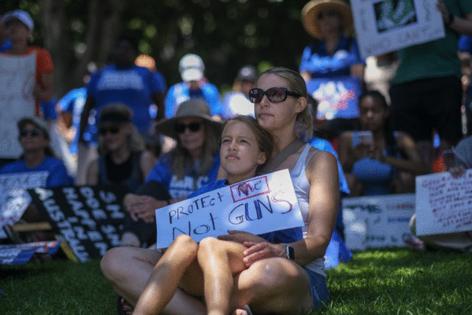 SACRAMENTO, Calif. — California Atty. Gen. Rob Bonta on Thursday pledged to work with the governor and lawmakers to pass new gun control legislation “to keep Californians safe” in response to a Supreme Court ruling that weakens requirements to obtain a license to carry a concealed weapon in the state.

“While this decision is no doubt a setback for the safety of Americans, it also affirmed the rights that states maintain to protect our people,” Bonta said. “It leaves us with options to protect our families, and we intend to use those options.”

Bonta said a state requirement for gun owners to provide “good cause” to obtain a license to carry a concealed weapon is likely unconstitutional under the Supreme Court ruling. But he reminded Californians that carrying a loaded firearm in most public spaces is still generally prohibited without a license issued by local law enforcement. Requirements to obtain a license, such as a background check, a firearms safety course, and proof of residency, employment or business in a local area remain in effect.

State leaders for weeks have been considering ways to respond in anticipation of the high court ruling that challenges limitations on eligibility for concealed-weapons licenses in California.

The Supreme Court held in its 6-3 ruling Thursday that a New York law violated the 2nd and 14th Amendments by requiring people to demonstrate a “special need for self-protection.” The decision in New York State Rifle & Pistol Assn. vs. Bruen ruled that the requirement is unconstitutional because “it prevents law-abiding citizens with ordinary self-defense needs from exercising their right to keep and bear arms.”

California lawmakers plan to amend and pass Senate Bill 918 from state Sen. Anthony Portantino, D-La Cañada Flintridge, in response to the ruling. The legislation will specify the places weapons cannot be carried and clarify qualifications for obtaining a license, Bonta said.

“So in California, we’re going to make it clear that an assessment of dangerousness is an essential element of the concealed carry application,” Bonta said. “The assessment is going to be robust, including looking at arrests, convictions, restraining orders and other publicly available information that might suggest that a person poses a danger to themselves or to others.”

Gov. Gavin Newsom also weighed in Thursday, pushing back on the “radical decision” from the Supreme Court.

“While this reckless decision erases a commonsense gun safety law that existed for decades, California anticipated this moment,” Newsom said. “Our state will continue to lead in the fight to keep our people safe.”

Since taking office, Los Angeles County Sheriff Alex Villanueva has held a different view about concealed weapons. Villanueva has dramatically increased the number of permits issued in the county, with active concealed carry weapon permits skyrocketing from 155 holders in June 2020 to more than 2,800 as of last month, according to statistics released by the Sheriff’s Department.

“Sheriff Alex Villanueva has expanded the number of approved concealed weapons permits as violent crime has risen within Los Angeles County. The Sheriff recognizes the threats to the residents have increased and has responded accordingly,” the sheriff’s office said in a statement Thursday. The agency’s lawyers are currently reviewing the Supreme Court decision.

Newsom joined leaders of the California Legislature last month with a promise to fast-track at least a dozen gun control bills one day after the shooting at a Uvalde, Texas, elementary school.

The legislation would further restrict California’s already stringent firearm rules, including one modeled after a Texas law that allows private citizens to sue anyone who aids and abets in an abortion.

Senate Bill 1327, crafted to challenge the Supreme Court’s refusal to block the Texas law, would authorize residents of California to sue gun manufacturers or distributors and anyone who imports or sells assault weapons, .50 BMG rifles or ghost guns.

Another measure Newsom backs would limit firearm advertising to minors, and a third would crack down on ghost guns in California.

Bonta is also sponsoring Assembly Bill 1594, a similarly high-profile measure that would establish a “firearm industry standard of conduct.” The measure would allow the California Department of Justice, local governments and gun violence survivors to file lawsuits against gun industry members if they were allegedly “irresponsible, reckless, and negligent” in the sale and marketing of their products and if they violated state firearm laws.

Newsom said Thursday he would sign a series of gun safety bills that he expects the Legislature to send to his desk next week. Some of the bills include urgency clauses, which means they need to receive a two-thirds vote of approval in each house of the Legislature and would immediately become law with Newsom’s signature.