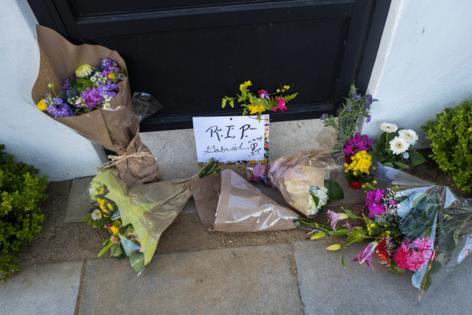 LOS ANGELES — The parents of a 31-year-old man fatally stabbed by an intruder at his home in the Beverly Grove neighborhood last year have sued the Los Angeles Police Department, claiming the police mishandled multiple 911 calls about the suspect in the hours before the attack.

Gabriel “Gabe” Donnay’s neighbors had called police on the suspect, Enoch Conners, at least four times that day for hopping fences in the neighborhood and threatening residents. Officers spoke to Conners multiple times, each time letting him go and telling the neighbors that they were safe to return to their homes, according to the lawsuit.

In doing so, the LAPD “unreasonably created a false sense of security” in the neighborhood and “created an opportunity” for Conners to keep hopping fences and ultimately kill Donnay just minutes after the last 911 call, Albert Donnay and Yvonne Ottaviano alleged.

“Prior to the officers’ false reassurances, the Beverly Grove community had been vigilant in observing Mr. Conner’s movements in order to guarantee their physical safety,” the lawsuit said. “The neighborhood did not lower their alertness until officers falsely [assured] their safety and affirmatively instructed them to return to their homes.”

Capt. Kelly Muniz, an LAPD spokeswoman, said the department can’t comment on open litigation but sends its condolences to Donnay’s family. The city attorney’s office did not immediately respond to a request for comment.

The lawsuit — which follows a similar one the parents filed in L.A. County Superior Court — is the most formal challenge yet to the LAPD’s actions leading up to Donnay’s killing. His death devastated Donnay’s family and large circle of friends, terrified and infuriated his neighbors, exacerbated tensions between local homeowners and those living in nearby homeless encampments, and raised questions for many about the way in which LAPD officers engage those who are volatile or in mental crises.

Police said Conners, who killed himself in an adjacent backyard after killing Donnay, was transient and living out of his car, and neighbors who interacted with him before Donnay’s killing said he was acting erratically and appeared to be experiencing a mental breakdown.

Police have previously said the officers who responded to the neighborhood that day had limited options because they had not personally witnessed Conners trespassing, didn’t have a resident willing to make a citizen’s arrest, and therefore had no grounds for detaining him.

“There’s only so much they can do,” Det. Sean Kinchla, of the West Bureau homicide unit, said at the time. “On one hand, you’ve got to try to help out the person making the [911] call, but on the other hand, the person that is the subject of the call also has rights.”