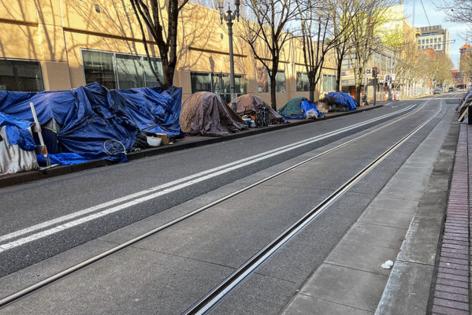 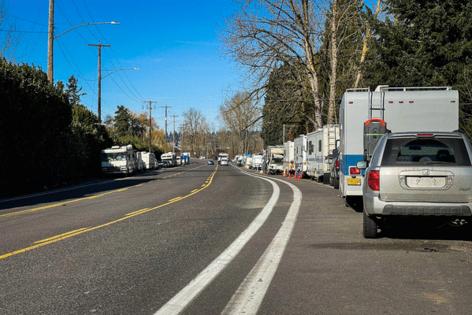 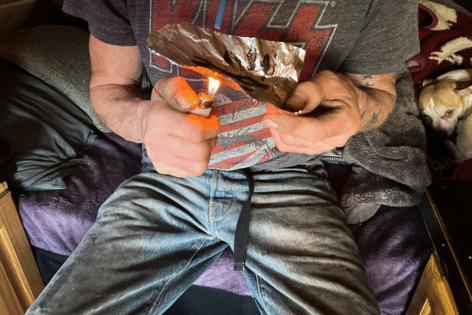 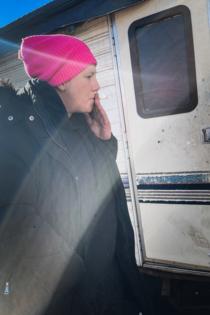 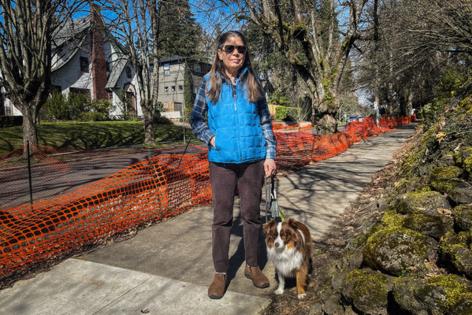 PORTLAND, Ore. — Michelle Farris never expected to become homeless, but here she was, sifting through garbage and towering piles of debris accumulated along a roadway on the outskirts of Northeast Portland. Farris, 51, has spent much of her adult life in Oregon, and has vivid memories of this area alongside the lumbering Columbia River when it was pristine, a place for quiet walks.

Now for miles in both directions, the roadside was lined with worn RVs and rusted boats doubling as shelter. And spilling out from those RVs, the trash and castoffs from this makeshift neighborhood also stretched for miles, making for a chaos that unnerved her.

Broken chairs, busted-up car parts, empty booze bottles, soiled blankets, discarded clothes, crumpled tarps. Every so often, it was more than she could bear, and she attacked the clutter around her own RV, trying furiously to organize the detritus into piles.

“Look at all this garbage out here — it used to be beautiful nature, but now it’s all polluted,” she said, as a stench of urine and burned rubber hung in the damp air. “The deer and river otters and beavers have to live with all this garbage.”

She paused a moment, glancing in the distance at a snow-capped Mount St. Helens. A line of RVs dotted the horizon.

Portland’s homeless problem now extends well beyond the downtown core, creating a crisis of conscience for this fiercely liberal city that for years has been among America’s most generous in investing in homeless support services. Tents and tarps increasingly crowd the sidewalks and parks of Portland’s leafy suburban neighborhoods. And the sewage and trash from unsanctioned RV encampments pollute the watersheds of the Willamette and Columbia rivers.

The RV encampments have emerged as havens of heroin and fentanyl use, a community of addiction from which it is difficult to break free, according to interviews with dozens of camp inhabitants. Even while reflecting on their ills, many of the squatters remarked on the surprising level of services available for people living homeless in Portland, from charity food deliveries and roving nurses to used-clothing drop-offs and portable bathrooms — even occasional free pump-outs for their RV restrooms, courtesy of the city.

Giant disposal containers for used syringes are strategically located in areas with high concentrations of homeless people. Red port-a-potties pepper retail corridors, as well as some tony family-oriented neighborhoods. In parts of the city, activists have nailed small wooden cupboards to street posts offering up sundries like socks, tampons, shampoo and cans of tuna.

“Portland makes it really easy to be homeless,” said Cindy Stockton, a homeowner in the wooded St. Johns neighborhood in north Portland who has grown alarmed by the fallout. “There’s always somebody giving away free tents, sleeping bags, clothes, water, sandwiches, three meals a day — it’s all here.”

Portland, like Los Angeles, Sacramento and much of the San Francisco Bay Area, has experienced a conspicuous rise in the number of people living in sordid sprawls of tents and RVs, even as these communities have poured millions of tax dollars — billions, collectively — into supportive services.