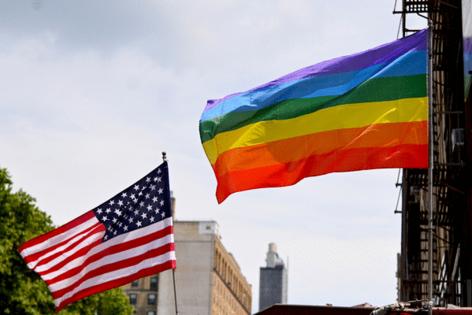 NEW YORK — A library on Long Island has voted to remove “all Pride displays” as well as Pride-related books from its children’s sections.

The Smithtown Library Board of Trustees voted 4-2 Tuesday to ban any and all displays related to LGBTQ Pride from kids’ areas at Smithtown Library buildings, a move that was met with fierce backlash and call for action by advocates.

The New York Library Association slammed Smithtown’s move, calling it “a direct violation of NYLA’s commitment to intellectual freedom and the freedom to read that libraries are entrusted to uphold.”

The organization reaffirmed its commitment to stand alongside the LGBTQ community, “especially our LGBTQ+ youth, who utilize libraries across the state as a refuge to foster their love of learning and of their authentic selves.”

Gov. Kathy Hochul tweeted Wednesday night that “our public spaces should be accepting our young people — not rejecting them,” reminding all LGBTQ New Yorkers that the state supports and welcomes them.

The LGBT Network, a nonprofit that fights for the rights of LGBTQ people and their families in Queens and Long Island, has planned a news conference later Thursday to announce its plans to oppose anti-LGBTQ measures in libraries and schools.

“Wednesday’s bigoted move by the Smithtown Public Library to remove displays and LGBT books enraged members of the LGBT community in Suffolk County, where over 100,000 LGBT residents reside,” the group said in a statement ahead of the press event.