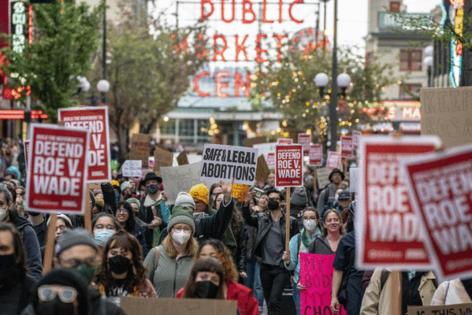 SEATTLE — A woman from Idaho, where abortion has become illegal, travels to Washington to end her pregnancy. A prosecutor in the woman's home state declares an Idaho citizen has been killed — and tries to prosecute the woman or the abortion provider for murder.

That's a scenario envisioned by Drexel University law professor David Cohen if the U.S. Supreme Court overturns Roe v. Wade in a decision expected any day now. Cohen, who foresees likely interstate battles if some states continue to allow abortion while others outlaw it, imagines other scenarios too.

"The boyfriend or mother of the patient will say: 'You have killed my granddaughter or my son. I'm going to sue you for wrongful death,' " Cohen said. Or, he said, someone in an anti-abortion state will attempt to go after the person who drove a patient to Washington to seek an abortion.

Some see those scenarios as unlikely — or "ridiculous" scaremongering by abortion rights activists, in the words of James Bopp Jr., general counsel for the National Right to Life Committee.

"The idea of federalism is that each state gets to adopt its own laws," Bopp said.

Yet, Bopp this month circulated model legislation for anti-abortion states that seeks to stop some people, namely minors, from traveling to other states without parental consent to end their pregnancies. A person who takes a minor across state lines for an abortion with the intent of keeping parents unaware would be guilty of a felony: trafficking.

While it's not clear what Washington could do about such prosecutions and lawsuits, Washington Attorney General Bob Ferguson has put together a team of more than 20 staffers to prepare.

"We're not waiting around to start thinking about what a case might look like. We're doing it right now," Ferguson said, promising he'll do everything he can to uphold a 1991 initiative codifying Roe v. Wade into state law, ensuring abortion protections even if the high court opinion no longer stands.

Local abortion clinics, too, are weighing the possibility they will become targets for anti-abortion forces in other states like Texas and Idaho, which allow lawsuits against abortion providers or those helping someone end their pregnancy.

"We may be buried in legal action," said Mercedes Sanchez, a spokesperson for Cedar River Clinics, which has several facilities around the state.