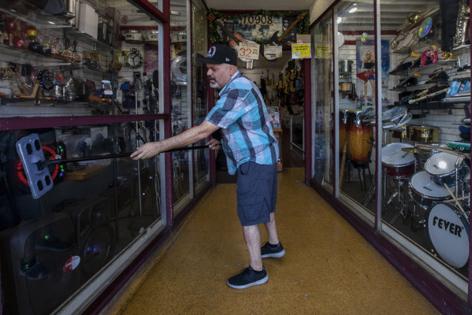 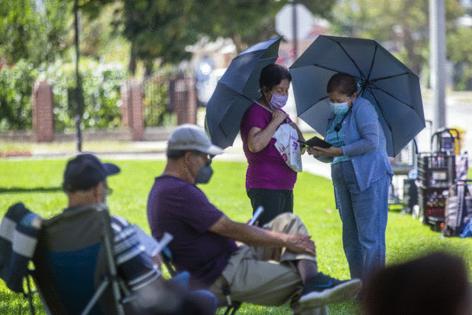 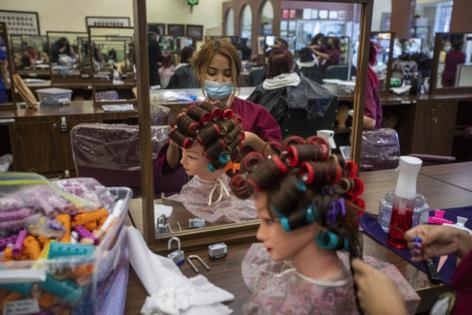 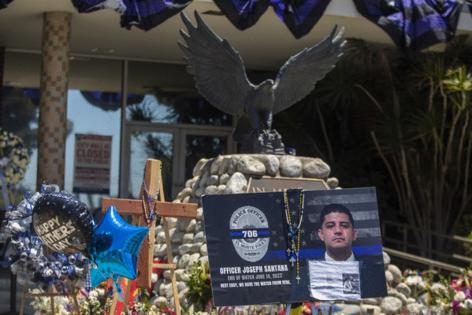 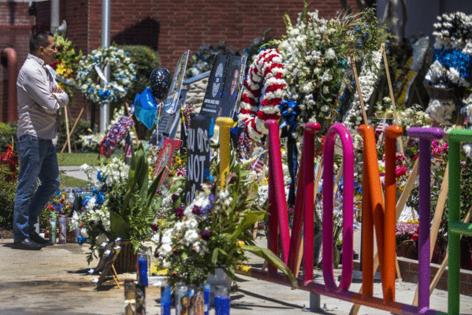 During the Great Recession a decade ago, El Monte was in danger of losing much of the ground it had gained.

These were painful blows for a tightknit city that had become known, after a rocky period in the ’80s and ’90s, as one of the safest of its size in the country.

But El Monte clawed its way back and was starting to prosper until the pandemic, which put some development projects on hold and hit essential workers and Latino residents particularly hard.

Most recently, on June 14, two El Monte police officers — homegrown boys — were shot and killed while responding to a domestic-violence call at a motel on the city’s south side.

Bisected by the 10 Freeway, El Monte is the kind of place that most people drive past — unless they’re headed to Longo Toyota. The city’s partly empty shopping centers are not a draw for outsiders.

But for its 115,000 residents, El Monte feels like a small town, where people meet for breakfast to plan Easter egg hunts and talk about how to improve things, carpenters volunteer to build tiny libraries for kids, and former residents call the mayor after a tragedy to ask how they can help.

“They’ve reached out to say they miss El Monte,” said Mayor Jessica Ancona, the daughter of Mexican immigrants and a lifelong resident, who has fielded calls from people across the country after the officers were killed. Though the city is often portrayed as a place for newcomers, she said, bonds can go back decades.

Ancona and Councilmember Victoria Martinez Muela played on the El Monte Fillies softball team together. The city prides itself on having police officers who grew up in El Monte and still live there.

That sense of community was on display at a candlelight vigil Saturday for the two officers, Joseph Santana and Michael Paredes, both El Monte natives. Santana, 31, had been on the job for less than a year; Paredes, 42, was his training officer and came up through the department’s cadet program.

The suspect, Justin Flores, 35, shot himself amid a gun battle with other officers in the Siesta Inn parking lot and died at the scene, sources told The Times.

“Knowing that this is my department, and I’ve worked and seen them in the halls, it really hurts me a lot,” said Montserrat Sanchez, 17, who spent three years in the El Monte Police Department’s Explorer program for students. She was among hundreds of people at Saturday’s vigil outside the police station, holding candles and bringing flowers.

The city’s true legacy is one of resilience, said Romeo Guzmán, a Claremont Graduate University assistant professor and an editor of the book “East of East: The Making of Greater El Monte.”

How El Monte is perceived is a battle that has stretched back decades, he said, and is encapsulated in the mythology surrounding the Santa Fe Trail.

The city seal depicts a horse-drawn covered wagon with the phrase “End of the Santa Fe Trail.” A city park and a large shopping complex are named for the route. El Monte students are taught that their city was the last stop on the 19th-century corridor across the American West.

In fact, Guzmán said, the commercial and migratory route stretched only as far as Santa Fe, N.M. — hence the name.

“When you buy into the Santa Fe Trail history, you are denying your own history,” Guzmán said.

Instead, he said, El Monte should be celebrated for its Chicano writers and poets, including Salvador Plascencia and Toni Plummer, as well as the immigrants who move to the town and work in small businesses along Valley Boulevard, Garvey Avenue and other thoroughfares.

The Siesta Inn sits on a stretch of Garvey dotted with stucco strip malls and car dealerships.

The mom and pop stores hint at the city’s evolution: panaderías sit near restaurants serving pho and music schools that cater to a growing Asian immigrant population. About half of El Monte residents were born in other countries, split roughly evenly between Asia and Latin America, according to Census data.

Residents on neighboring streets of single-family homes and apartment buildings have characterized this section of Garvey as a hot spot for prostitution, gun violence and drug dealing. While there is a fair amount of gang activity, most violence isn’t directed at bystanders, said Heidy Lopez, 27, who moved to El Monte three years ago from South Los Angeles.

Lopez, her husband and their two children live in a one-bedroom apartment about a quarter-mile from the Siesta Inn. Lopez, who moved to Southern California from Nicaragua, said she has bonded with other Central Americans living nearby.

“I’ve felt safe here,” Lopez said. “We are part of a community, and we look after each other.”

Last year, there were six homicides in El Monte, compared with eight in 2020 and four in 2019, according to the L.A. Times Homicide Report.

The city’s success at diversifying its economy and reducing its reliance on auto dealerships, including the sprawling Longo Toyota facility, has been patchy.

Several major employers — a Japanese food importer, some e-commerce warehouses and a factory for a U.S. military contractor — have moved in. But big-box businesses, including Walmart, have committed to the city and then withdrawn, with the pandemic complicating efforts. Those shifts, and the specter of a recession, have left working-class residents on edge as they struggle with soaring gas prices, rising rents and inflation.

When Cosme Jimenez, a retired telephone repair technician, moved from Hermosillo, Mexico, to El Monte in 1965, the city was home to outlets of Sears, JCPenney, Thrifty drugstores and other notable brands.

The once predominantly white town quadrupled in size, from about 13,000 residents in 1960 to nearly 70,000 a decade later, according to U.S. Census figures. The population is now 63% Latino and 31% Asian.

“People wanted to move to El Monte,” said Jimenez, 77, as he sipped a lemonade at Denny’s. “Now we’re having trouble getting businesses to come and stay.”

The El Monte Shopping Center’s many vacancies are proof of the city’s struggles to attract investment, he said.

A vacant storefront behind the Denny’s bears an old but legible imprint: “Sears Outlet.” Other big names, like Kmart and Dearden’s, came and went.

While Pasadena has the Rose Bowl and Temple City its iconic camellias, El Monte’s pride is Longo Toyota, Jimenez said — an anchor in the city since 1967 that is often called the biggest car dealership in the country. The dealerships, he said, “have been keeping the city going.”

“It always feels a bit like we’re waiting for that financial shoe to drop — something in the economy that sets us back,” said Andre Quintero, who was mayor of El Monte for 11 years. “We laid a good foundation for where the city could be, but there’s a lot more work that needs to be done. We’re in transition.”

El Monte must plan for about 8,500 new units of housing — nearly 1,800 for very low-income residents — by 2029, according to the Southern California Association of Governments.

It’s a logical place to build, some argue. Downtown L.A. is an easy drive on the 10. Residents can also catch the Silver Line bus or Metrolink’s San Bernardino line.

“There is a lot of potential here,” said James Acevedo, founder and chief executive of Grapevine Development, which is building a housing and retail development near the El Monte Transit Center, the busiest bus station west of Chicago. “You just have to stick with it.”

Acevedo’s company is betting on young professionals moving to the area. But the pressure to build more housing and bring in new investment has brought fears of gentrification for some residents who live paycheck to paycheck.

Nearly 6 in 10 city residents are renters. About 17% live below the poverty line, according to U.S. Census Bureau data, and the median income of $54,000 is about two-thirds the county average.

“You may leave El Monte, but it never leaves you,” said Joe Torosian, 57, a pastor of Burbank Faith Church of the Nazarene who was raised in El Monte and was editor of the high school athletics website Mid Valley Sports, based in the city, for 15 years.

Torosian said he grew up in the mid-1970s as the lone “half Armenian Protestant kid” on a street of Mexican Catholics, where kids became “El Monte tough,” bonding through Boy Scouts, Little League and church groups as their families pieced together a living.

The modest two-bedroom home on Kings Court where his single mother raised three children was bulldozed more than a decade ago to make way for the 114,000-square-foot Santa Fe Trail Plaza — a strip mall that includes Petco, Superior Grocers and Ross Dress for Less.

Even after the destruction of his old family home, Torosian feels close to his El Monte roots.

“I have friends who live in other states now and across the country who always identify as being from El Monte,” Torosian said. “It’s who we are.”