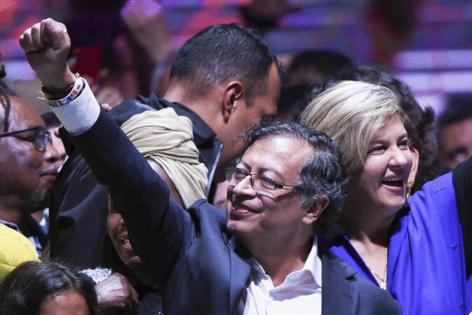 Colombia’s president-elect Gustavo Petro is wasting no time in fulfilling his promise of normalizing relations between his country and the socialist regime in Caracas, discussing with Venezuelan ruler Nicolás Maduro the reopening of the border between the two nations three days after winning the election.

Petro, a former guerrilla who won the presidential election on Sunday promising to make big changes in Colombia, has promised to reestablish diplomatic ties with Venezuela, which were interrupted when Bogotá decided to recognize opposition leader Juan Guaidó as the legitimate president of the neighboring country, along with the United States and about 50 other nations.

On Wednesday, Petro made it clear that the change in his country’s policy towards Venezuela is soon to change. “I have reached out to the Venezuelan government to open the borders and restore the full exercise of human rights on the border,” Petro wrote on his Twitter account.

Petro’s victory raises doubts about the future relationship of the Colombian government with the Venezuelan opposition, which until now has seen Bogotá as one of its greatest allies. President Ivan Duque’s support of Guaido’s movement led to the breaking of diplomatic relations between the two countries in February 2019.

The conversation about the new relationship between the two countries was confirmed by Maduro himself, who said that he took advantage of the call to congratulate Petro on his electoral victory during the weekend.

“I spoke with the elected president of Colombia, Gustavo Petro, and, on behalf of the Venezuelan people, I congratulated him on his victory. We discussed the willingness to restore normalcy at the borders, various issues about peace and the prosperous future of both peoples,” Maduro said on Twitter.

Colombia and Venezuela have a common border of almost 1,400 miles. It was closed in August 2015 by Maduro due to tensions between the two nations.

The border’s opening had also been promised by Petro’s rival, the independent businessman Rodolfo Hernández, who narrowly lost on Sunday.