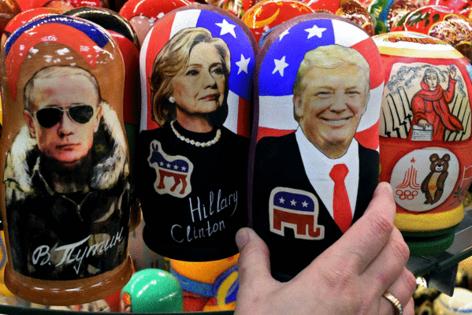 NEW YORK — The acquittal last month of a former Hillary Clinton campaign lawyer accused of lying to the Federal Bureau of Investigation was a blow to Republicans who wanted to take the Russia probe down a notch. But it wasn’t a total loss for former President Donald Trump.

Trump’s revised suit also adds U.S. Representative Adam Schiff and former U.S. Deputy Attorney General Rod Rosenstein to a case that already has dozens of defendants, accusing them of working with Clinton to smear Trump while he was in office.

Though Sussmann was acquitted of lying to the FBI, the case was highly touted by right-wing commentators who seized on testimony they claimed showed Clinton and others pushed a false narrative that Trump colluded with Russia in order to harm his reputation and administration.

Trump’s new complaint “incorporates all of the damning information that was uncovered throughout the course of the Sussmann trial,” his lawyer, Alina Habba, said in a statement.

Clinton’s attorneys have moved to dismiss the suit, calling it a “fundraising tool” full of political grievances. Legal experts have also called it long-shot attack typical of Trump.

If it survives, though, the case will progress just as Trump weighs a possible run for reelection in 2024, and potentially pit the 2016 rivals against each other at trial.

It emerged at the Sussmann trial that Clinton personally authorized her campaign to tip off journalists about a suspected communications link between servers at Trump Tower and a Russian bank. Her campaign manager, Robby Mook, testified at the trial that they shared the information even though they “weren’t totally confident” in its veracity. Sussmann went further and took the tip to the FBI, which ultimately debunked the server theory.

Durham, who was appointed by Trump to examine the origins of the FBI probe of Russian interference in the 2016 election, accused Sussmann of lying when he told the FBI that he wasn’t sharing the server tip on behalf of the campaign. The jury found the lawyer not guilty.

Despite the loss for Durham, Trump claims the case bolsters his conspiracy theory.

The defendants “knew that the plaintiff was not colluding with Russia or, at a minimum, acted with reckless abandon as to the truth of whether the plaintiff had colluded with Russia,” Trump claims in the revised complaint. “Despite said knowledge, the defendants conspired to disseminate false information and spread a false narrative in an attempt to ruin the plaintiff.”

Schiff was a vocal critic of Trump during the various Russia investigations and is currently a member of the House Jan. 6 committee. A spokesperson for the California Democrat had no immediate comment. Rosenstein, now a lawyer at King & Spalding, didn’t immediately return a message seeking comment.