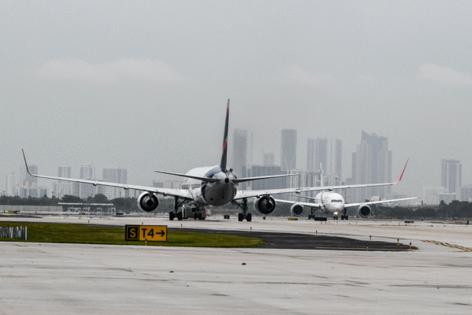 MIAMI — Federal investigators on Wednesday arrived at Miami International Airport to look into what caused a passenger jet to make a crash-landing the evening before.

A spokesperson for the National Transportation Safety Board, an independent agency that investigates transportation accidents including plane crashes, told the Miami Herald the agency will release a preliminary report on the crash-landing of RED Air Flight 203 in the coming days.

The plane made a crash-landing after a landing gear malfunction, skidding on the runway before coming to a stop in a grassy area and bursting into flames. Three passengers were taken to the hospital with minor injuries, but everyone on board survived the harrowing incident.

The plane will remain in the runway area Wednesday as investigators conduct their initial review.

Two of the airport’s four runways are expected to remain closed until that initial assessment is complete, at which point the plane will be moved and the investigation will continue. That may cause some flights to be delayed Wednesday.

In a statement, RED Air said the plane “had technical difficulties after landing” but did not provide additional details.

“At RED Air we express our absolute solidarity with the passengers and crew of the aircraft,” the airline’s statement said.

Early reports indicated there were 126 people on board, but a company spokesperson told the Herald there were 126 adult passengers, four infants and 10 crew members comprising a total of 140. Miami International Airport confirmed those numbers Wednesday.

RED Air is a low-fare airline based in the Dominican Republic that launched in November 2021 and only flies between its home base in Santo Domingo and Miami International Airport.

One of the airline’s two flights scheduled to arrive in Miami on Wednesday was canceled, according to online flight information. Another originally set to depart from Santo Domingo at 8 a.m. was later delayed to 2 p.m.

(Devoun Cetoute and Omar Rodriguez Ortiz contributed to this report.)