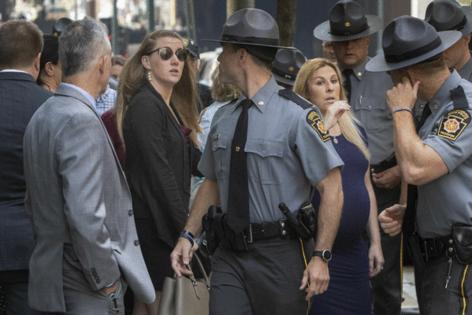 Jayana Webb, 22, is accused of fatally hitting Troopers Martin Mack III and Branden T. Sisca, along with Reyes Rivera Oliveras, 28, with her car on I-95 in the early morning hours of March 21. Webb, of Eagleville, was charged with third-degree murder for the three deaths, but on Wednesday, Municipal Court Judge Karen Simmons dismissed the three murder counts.

On Wednesday evening, a spokesperson for the District Attorney’s Office said prosecutors had refiled the third-degree murder charges, with a hearing date on the refiled charges not yet set.

The courtroom was packed with friends, family, and supporters of Webb on one side, and a crowd of Pennsylvania State Troopers clad in their gray uniforms on the other. Among Webb’s supporters were women wearing shirts from Reuniting Family Bail Fund, an organization that advocates for criminal justice reform.

Mack’s and Sisca’s wives, Stephanie and Brittany, sat in the front row, feet away from Webb. Occasionally, each of the widows would march out of the courtroom, overcome by emotion. The hallway was also lined on either side with state troopers.

For nearly eight hours, Chung and Webb’s attorney sparred over what became the most pertinent question, relating to Webb’s murder charges: whether there was malice.

Richard Cohen, a forensic toxicologist who analyzed blood samples taken from Webb, said her blood alcohol content was 0.211, more than twice the legal limit, at the time of the crash. The active components of marijuana were also identified in Webb’s blood, he said.

Pennsylvania State Trooper Mark Gibble, a computer crime investigator with the state police, testified that tweets posted on accounts associated with Webb around the time of the crash came from the phone that was taken from her at the scene.