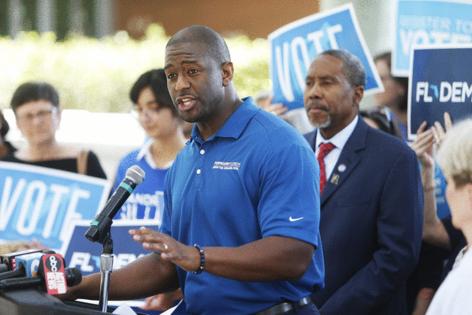 TALLAHASSEE, Fla. — Andrew Gillum, who narrowly lost to Ron DeSantis four years ago, was indicted Wednesday on federal charges of conspiracy, wire fraud and making false statements during his time as Tallahassee mayor and run for governor.

Gillum proclaimed his innocence in a statement sent out by his attorneys before the indictment was unsealed in Tallahassee.

Gillum, the first Black candidate for governor in Florida history, won a surprise victory over former U.S. Rep. Gwen Graham, Miami Mayor Phil Levine, and others in a crowded Democratic Party primary. He lost by just 0.4%, or about 32,000 votes, to DeSantis in November.

The indictment charges Gillum with defrauding one contributor to his 2018 campaign, “Individual F,” of $150,000 of his $250,000 contribution, according to the indictment. It alleges Gillum and his associate Sharon Lettman-Hicks put that money into a separate 501(c)(4) organization and later filed fraudulent campaign reports to cover it up.

Three of the counts involved Lettman-Hicks sending text messages including needing “to move 250K... ASAP” and that the contributor was “breathing down (her) neck and may demand his money back.”

Orlando attorney John Morgan, who along with his firm gave Gillum’s campaign for governor more than $3 million in 2018, has long criticized him for how his campaign money was spent.

“At this point, nothing about him would surprise me,” Morgan said in an email Wednesday. “He kept my money and others. Millions. He didn’t spend it on the campaign and lost by a whisker. He destroyed the Democratic Party forever in Florida.”

Morgan said he had “no idea” who “Individual F” in the indictment was.

Other charges from his time as Tallahassee mayor involve many of the same allegations as the ethics violations he was accused of in 2018, including gifts of a boat trip around New York harbor and tickets to the hit Broadway musical “Hamilton.”

A man accused of leaving two unconscious women at hospitals, where they were later pronounced dead from drug overdoses, has been charged with their murders, court records show.

The Biden administration says it’s taking steps to increase access to medication abortion in response to the Supreme Court decision to ...Read More