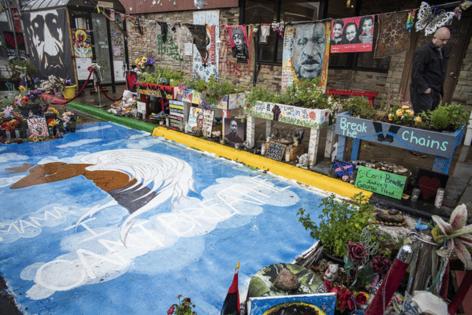 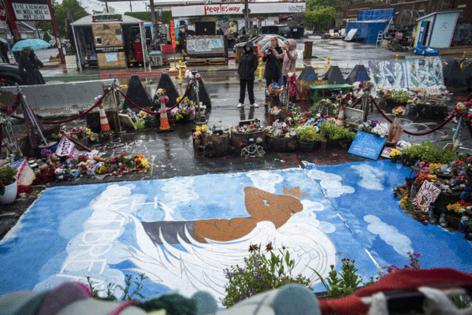 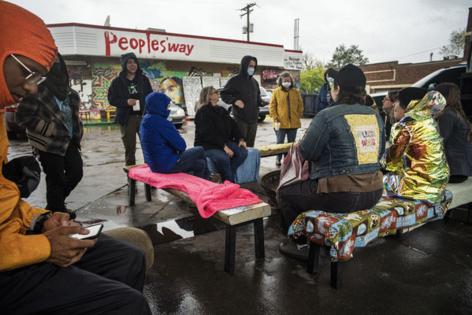 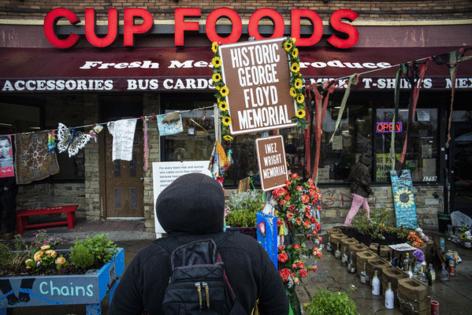 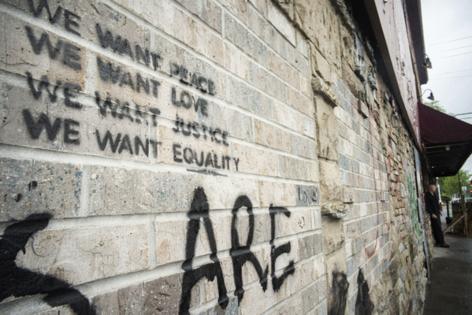 MINNEAPOLIS — George Floyd's brother and his aunt came to the corner of 38th Street and Chicago Avenue on Wednesday night, exactly two years after his killing, and quietly made official the name the intersection has carried almost ever since.

"George Perry Floyd Square," read the commemorative street sign, now mounted over a corner of the city forever changed by the events of May 25, 2020, when former Minneapolis police Officer Derek Chauvin held Floyd under his knee until he died.

The ceremony quickly done, people gathered for the occasion headed to a nearby cemetery for a candlelight vigil.

The anniversary of Floyd's murder had started quietly that morning at George Floyd Square, a cold spring rain falling. Maria Bertrand, who works down the street at a tenant advocacy organization, was worried the weather would keep people away.

"I think it's still really important to remember why we have this and to remember why this is all here, why the community came together," Bertrand said, as a small crowd gathered.

Bertrand expressed hope that the passage of time hasn't dimmed support for changes to policing practices that were fervently demanded in the immediate aftermath of Floyd's death.

Earlier, a man who identified himself only as Joe gazed somberly at the spot where Floyd died.

Unny Nambudiripad recalled how the rise of activism and mutual aid following Floyd's killing was like nothing he'd ever seen.

"It's hard to feel like we've made much progress, but I think that underlying the whole uprising and the murder of George Floyd was broader questions of racism and inequity in our society," he said. "And so I'm really glad that those issues have become more prominent and there's more momentum, because I think that will affect things related to police and police violence if we can address these structural, systemic issues around racism."

At noon, Minneapolis Fire Chief Bryan Tyner was in his downtown office when renditions of the Black national anthem and collections of racial justice songs echoed through the bells of City Hall. An hour later, he recounted how he felt during a city event marking the second anniversary of Floyd's murder.

"I don't know about you ... but I felt a great sense of pride," Tyner said in a room filled with city employees, including Mayor Jacob Frey.

The goal of the second annual Day of Racial Reckoning Assembly was to commemorate the life of Floyd and others killed senselessly, to find healing and maintain resilience, said Tyner, the department's second Black fire chief.

"It is painfully clear to me that we still have a long way to go," said Tyner, who helped organize the event. "But I do believe and I see evidence that we're just a little bit further along than we were at this time last year."

Alberder Gillespie, director of the city's Civil Rights Department, took employees back to that day when Chauvin knelt on Floyd's neck until he couldn't breathe. She challenged her colleagues to reflect and ask themselves the role they play in perpetuating racism and white supremacy.

"What you have to understand is there had to be a culture that was created that made that moment possible," she said, referring to Chauvin's actions. "What role did we play? ... You cannot have reckoning without truth."

Wednesday evening, about three dozen people gathered in front of the governor's residence in St. Paul to remember Floyd and others killed by law enforcement, including Amir Locke and Jamar Clark. People held signs and artwork and led call and response chants including, "Black Lives Matter" and "Say his name."

Speakers demanded police reform and systemic change. Many expressed frustration at the lack of legislative action since Floyd's death.

Back at George Floyd Square, the sign dedication did not start smoothly. Floyd's family members met up with Frey and City Council President Andrea Jenkins, and as they proceeded to the site some in the crowd began calling out: "Go home, Frey."

The group ducked into a nearby coffee shop and did not come out for some time. Activist Eliza Wesley asked those in the crowd to redirect their anger.

"I know we don't like Mayor Frey right now, but wait a minute, this is not about Mayor Frey today," Wesley said. "This is about George Floyd and his family right now."

Once the dedication got going, Frey declined an opportunity to speak. He had released a prepared statement earlier in the day, saying the city will continue to utter Floyd's name and remember his life and legacy "as a friend, father, brother, and loved one."

"(Floyd's) name has been heard in every corner of our world," Frey said. "In these days of reflection and remembrance, we must lead with kindness towards one another — and especially look out for and support our Black friends and neighbors."