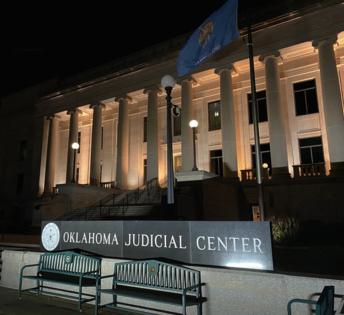 State lawmakers, led by Republicans, pushed through the law making Oklahoma the first state to ban abortions while the landmark U.S. Supreme Court decision in Roe v. Wade protecting a woman’s right to abortion still stands. The US Supreme Court appears set to overturn Roe v. Wade, according to a copy of a draft opinion that was leaked to Politico.

“Today, for the first time in nearly 50 years, abortion is illegal — at every stage of pregnancy — in an American state,” Emily Wales, president and CEO of Planned Parenthood Great Plains, said in an emailed statement Wednesday. Her organization is one of five providers planning to file a joint challenge as soon as the Oklahoma City courthouse opens Thursday morning.

“Legislators who, in overwhelming numbers, cannot become pregnant have just made lesser citizens of those who can,” she said.

The Oklahoma law bans almost all abortions from conception — with narrow exceptions to save a mother’s life or in cases of rape and incest that are reported to police. It also empowers civilians to press charges against those they believe have performed an abortion or helped someone obtain one.

“We’re hoping the Oklahoma Supreme Court will step up and decide its own state constitution protects the right to abortion,” Center for Reproductive Rights attorney Rabia Muqaddam said in a phone interview before filing the lawsuit. “If that’s the case, then even if the U.S. Supreme Court overturns Roe in part or in whole, abortion will remain accessible in Oklahoma.”

The office of the Oklahoma attorney general didn’t immediately respond to a request for comment.

The Center for Reproductive Rights, which represents Oklahoma abortion providers, bypassed federal courts because its attorneys believe the Oklahoma constitution offers broader due process protection and a clearer right to privacy than the U.S. Constitution, Muqaddam said.

The group seeks to leverage a prior decision by Oklahoma’s top court to establish a state right to abortion that’s independent of Roe. In a separate case concerning state authority to medicate someone against their will, the Oklahoma Supreme Court ruled the state constitution recognizes privacy rights and freedom from “violation of bodily autonomy,” Muqaddam said.