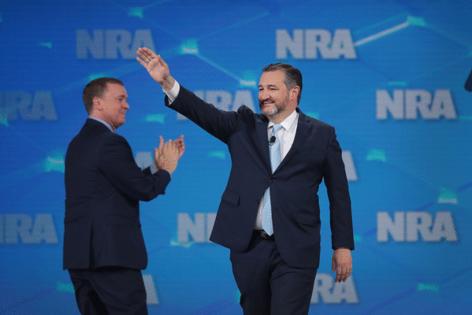 Texas Gov. Greg Abbott and Sen. Ted Cruz are slated to speak to the National Rifle Association on Friday, just days after a teen gunman in the city of Uvalde, Texas, allegedly killed 18 children and one adult in a horrific massacre.

The gunman was killed after the shooting in Robb Elementary School.

Former president Donald Trump is also scheduled to attend that NRA rally at Houston’s George R. Brown Convention Center, according to a press release put out by the pro-gun group earlier this month.

“Join us on May 27 in Houston,” NRA-ILA director Jason Ouimet said in that statement. “You won’t want to miss this celebration of American freedom!”

The NRA event’s venue is 280 miles away from Robb Elementary School, and would take 4 1/2 hours by car.

“Texans are grieving for the victims of this senseless crime & for the community of Uvalde,” Abbott tweeted after the killings.

He said that law enforcement had his support in investigating what appeared to be the actions of what authorities believe to be a lone gunman. Cruz also tweeted condolences on behalf of himself and his wife.

“Heidi & I are fervently lifting up in prayer the children and families in the horrific shooting in Uvalde,” the Texas senator said. “Thank you to heroic law enforcement & first responders for acting so swiftly.”

Houston station KHOU reported that Cruz collected more than $300,000 from pro-gun groups including the NRA during the 2018 election cycle. The Texas senator was reportedly the largest recipient of such funding.

Arizona Congressman Ruben Gallego had choice words for Cruz Tuesday — some of which started with the letter F.

“F--k your prayers,” he tweeted. “They haven’t worked for the last 20 mass shootings how about passing laws that will stop these killings.”

To make sure he wasn’t misunderstood, Gallego, an Iraq War veteran, directed two more similarly worded tweets at Cruz, one of which accused the right-wing anti-abortion advocate of prioritizing the preservation of fetuses over the lives of grade school students.

“You care about a fetus but you will let our children get slaughtered,” he added. “Just get your a-- to Cancun. You are useless.”

Cruz famously fled Texas for the warm weather of Cancun, Mexico, in the winter of 2021 when a snowstorm left millions of Texans without power.

This isn’t the first time the NRA has found itself hosting an awkwardly located rally in the aftermath of a massacre resulting from gun violence. In 1999, the organization hosted a gathering in Denver just days after 13 people were killed at Colorado’s Columbine High School. That rally was met with protests.

Tuesday’s violence in Texas comes just 10 days after an 18-year-old gunman in Buffalo, N.Y., allegedly shot and killed 10 people on May 14.