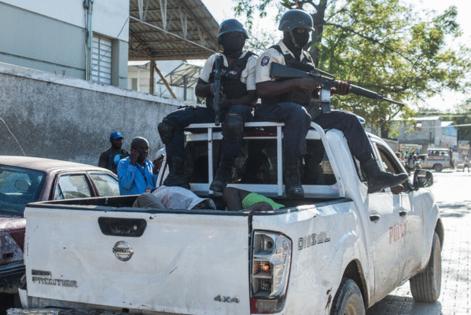 Prison inmates in Haiti were already facing horrendous conditions: overcrowding, prolonged pretrial detention, poor sanitation and shuttered courtrooms due to an ongoing strike by court clerks that began on April 12 over poor pay and working conditions.

Now they can add one more thing: lack of food and water.

“The situation is alarming,” said Marie Yolène Gilles, who runs the human rights group Fondasyon Je Klere, or Eyes Wide Open Foundation. “I’ve spoken to the directors of several prisons and they have told me that their cupboards are empty. The prisoners who are suffering from all this are calling me day and night, complaining that they do not have any food. When there is food, it’s not enough to feed everybody. There is no water.”

Gilles and other human rights advocates say the food and water scarcity has been ongoing for at least three weeks, but has worsened in recent days. It affects all of Haiti’s prison system, where more than 80% of the 11,152 people currently incarcerated depend on the government to feed them. This includes inmates at the Croix-des-Bouquets Civil Prison, where there was a deadly jailbreak last year, and the National Penitentiary, where the walls are visibly crumbling.

The urgency of the situation has led some of the 18 Colombians jailed as suspects in the assassination of Haitian President Jovenel Moïse, and who are in the National Penitentiary, to issue an SOS appeal in a series of text messages, shared with the Miami Herald, and in a two-minute video from behind bars.

“Hoy no hay comida otra ves,” one of the prisoners wrote in Spanish to say, “Today, again, there is no food.”

In the video, five of the ex-soldiers speak out about their situation, with one breaking down in tears, crying in Spanish that they “will die from hunger.” Another, appealing to “the whole world,” says that it has been 72 hours since they ate, took a bath or were let out of their cells. He added, while pointing to the floor, that they had to go to the bathroom in their cell.

A third ex-Colombian soldier complains on the video that they have spent 10 months imprisoned without access to an attorney and that “in this country there is no justice system.”

“We are closed in, isolated and without lawyers,” he said, jotting off the Haitian government’s violations. “No food, no water.”