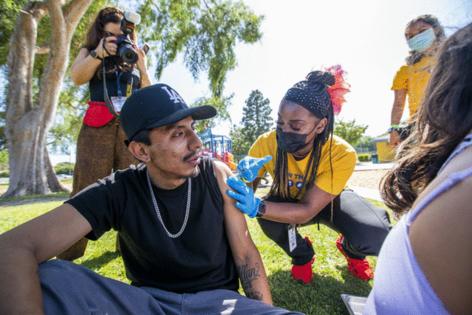 LOS ANGELES — The number of coronavirus cases in California has significantly worsened this past week, hitting a level not seen since the winter’s omicron surge and raising concerns about the possibility of a big jump in infections this summer.

Weekly coronavirus cases roughly doubled across wide swaths of California, including Riverside and Santa Barbara counties, as well as the Central Valley and Silicon Valley. They rose by roughly 85% in Orange, San Bernardino and Ventura counties.

Statewide, the increase was 63%, bringing the case rate to 231 for every 100,000 residents. A rate of 100 and above is considered a high rate of transmission.

Hospitalization rates, while increasing for the last four weeks, remain low. Hospitals in two of California’s most populous regions, L.A. County and the San Francisco Bay Area, are not under strain, and the rate of new weekly coronavirus-positive hospitalizations has remained at only a fraction of the number seen in New York and some other East Coast cities.

California officials remain hopeful that a relatively robust effort to get residents to take booster shots plus suggestions to wear masks and get tested frequently can help the state avoid the kind of intense surge those cities have experienced.

“The task in front of us is similar to work we had to do at other points over the past 2½ years: slowing transmission,” L.A. County Public Health Director Barbara Ferrer said in a statement. “We know what works — masking, testing, and vaccination, along with systems and policies that support the use of these and other effective safety measures.”

Nationally over the past two weeks, coronavirus cases have risen by more than 50% and hospitalizations by more than 30%, said Dr. Peter Chin-Hong, a University of California, San Francisco infectious disease expert.

The San Francisco Bay Area is currently home to California’s worst coronavirus case rate. The region is likely being hit hard with new infections now because of the “latest supercharged transmissible variant,” whose contagiousness is approaching that of measles, one of the most readily transmitted diseases for humans, Chin-Hong said in a briefing he gave to campus staff Friday.

Another factor behind the soaring case rates could be that a relatively large number of people in the Bay Area have not been exposed to the coronavirus until this point of the pandemic because of the region’s intensive efforts to keep the virus at bay.

Dr. Robert Kosnik, director of UC San Francisco’s occupational health program, said at the briefing that he expects coronavirus cases to continue going up for at least the next couple of weeks.

“I know that’s not good news, but that’s kind of what the data is pointing to,” he said.

The latest surge has been so disruptive that the Berkeley public school system has “only been able to fill about 50% of our teacher absences with substitute teachers,” the school district said in a statement. That has forced administrators to help out in classrooms.

Berkeley schools announced Friday a new order to reinstate an indoor mask mandate for students and staff for the remainder of the school year, effective Monday, including indoor graduations.

UC San Francisco is beginning to require universal masking at all large events with 100 or more attendees.

San Francisco had the highest case rate this past week of any California county: 460 for every 100,000 residents. The Bay Area overall is reporting 369 cases per 100,000.

The rate in the greater Sacramento area was 213; the San Joaquin Valley, 140; and rural Northern California, 139.

Los Angeles County’s week-over-week case count was up 16%; San Diego County’s was up by 33%.

Officials and experts in California cannot say with certainty why the state’s increasing coronavirus case rates have not translated into larger numbers of hospitalizations, leaving the state in a much better spot than the East Coast.

One possibility is that California is simply behind the East Coast, as has been the case at earlier points in the pandemic.

But it’s also possible that a combination of booster shot rates among seniors and masking practices might be playing a role and that California could reasonably hold out hope for a less severe spring and summer wave than New York.

The elderly are at highest risk of dying from COVID-19. Among those seniors who have been vaccinated but are still dying of COVID-19, most haven’t received a booster shot, Chin-Hong said.

Broader use of masks in parts of California, especially among older people, might also be keeping a lid on the kinds of infections that can send people to the hospital.

L.A. County and the Bay Area implemented local universal indoor masking orders for at least six months since last summer’s delta wave, while New York City declined to do so last summer and was under a statewide masking order for only two months during the fall and winter.

A longer duration of masking rules in L.A. County and the Bay Area may have influenced more people to continue wearing masks even after universal mask mandates ended in the state.

A greater use of masks among vulnerable people can reduce the number of people who need hospitalization, and even if a masked person gets infected, the mask can reduce the amount of virus that enters the body and thereby reduce the severity of the illness.

“And of course, California has a little bit of better weather. But it’s still decent in New York now, so it’s not like a huge difference,” Chin-Hong said.

In L.A. County, so far, the oldest residents have had among the lowest coronavirus case rates, while younger adults and teenagers have the highest case rates. Those trends could change; but that could be one explanation for why hospitals are not seeing signs of strain locally for now.

Even if case rates worsen dramatically in California, having a later spring wave than New York may be beneficial given that anti-COVID drugs like Paxlovid are now widely available — which wasn’t the case earlier this year — and healthcare providers and the public are more aware about getting them.

Paxlovid, a five-day course of pills manufactured by Pfizer, needs to be taken within a few days of symptom onset. It reduces the risk of hospitalization or death from COVID-19 by 89% among higher-risk adults who haven’t been hospitalized.