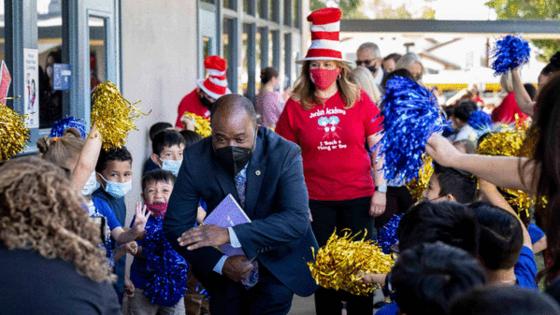 Despite it all, state Superintendent of Public Instruction Tony Thurmond could end up coasting into reelection.

"People are still angry, and they need to be heard. And I'm listening," Thurmond said in an interview with the Los Angeles Times. "We've got a lot of big problems ahead of us, but I feel uniquely qualified to move our students forward, and I'm hopeful that the California voters will give me that opportunity to continue."

Six candidates have filed to run against Thurmond for a four-year term as the leader of California schools in the June 7 primary. But none have the political advantages — the name recognition, funding or endorsements — of the incumbent. Unlike other state offices, a candidate for superintendent can win the job in the primary, without an election in November, by getting a majority of the vote.

Although the recall of three school board members in San Francisco this year showed that COVID-19 school frustrations have fueled voters, there are no signs of a similar effect on the superintendent race.

The influential California Teachers Association, which praised Thurmond as "a fierce advocate for public education" in a statement, has put more than $1 million into an independent expenditure committee to reelect him. Thurmond's campaign contributions have reached $1.4 million — an amount at least 25 times larger than that of any other candidate in the race.

Other endorsements for the incumbent include Gov. Gavin Newsom, the California Democratic Party and dozens of other prominent party officials including House Speaker Nancy Pelosi.

But that support obscures what Thurmond admits has been a "tough two years" on the job.

Among the criticisms he has faced since being elected as superintendent in 2018 after four years as a Bay Area Assembly member is a lack of influence and action during one of the most stressful times in education history. While superintendents in other states were leading the charge on COVID-19 school policies, Newsom was often the one briefing the public on distance learning and reopening, with Thurmond missing from some major announcements.

There's also been criticism unrelated to the pandemic.