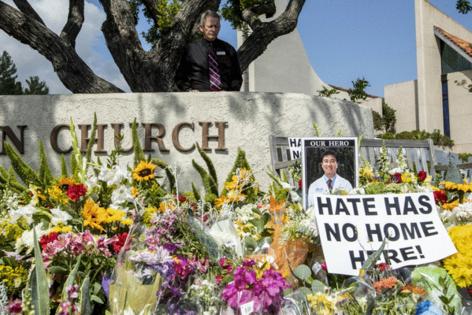 It could have been any Sunday morning at the Taiwanese church.

Elderly couples held hands and shuffled into the chapel.

Pastor Albany Lee led the Lord's Prayer, illuminated by blue light from the stained-glass window behind him.

But a week earlier, the Irvine Taiwanese Presbyterian Church had been shaken by an unimaginable act.

A man opened fire at a luncheon after the morning service, killing one person and injuring five others.

The suspect, 68-year-old David Wenwei Chou of Las Vegas, has been charged with murder and attempted murder for the shooting at Geneva Presbyterian Church in Laguna Woods, where the Taiwanese church rents space.

Like most of the church members, Chou was born in Taiwan. But his parents were from mainland China, and prosecutors say he was motivated by his opposition to Taiwanese independence, a cause that the Presbyterian church in Taiwan has long espoused.

On Sunday, 140 or so church members came to worship, their faith shaken but not broken.

"We cannot control people's evil, but we can rely on your good," Lee preached in Taiwanese, a dialect that was once suppressed by the Kuomintang government. "Because we deeply believe: God's good will overcome people's evil."

Bi-khim Hsiao, Taiwan's de facto ambassador to the United States, attended the service along with Louis M. Huang, director general of the Taipei Economic and Cultural Office in Los Angeles.