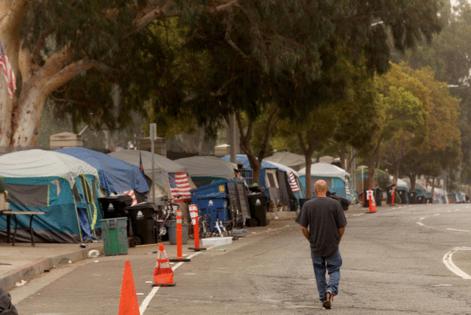 LOS ANGELES — A diversion program in Los Angeles designed to keep mentally ill, addicted or homeless adults out of jail and instead provide treatment and housing is having little success, according to statistics provided by police officials.

Nearly three-quarters of the 283 people deemed eligible for the Alternatives to Incarceration Diversion Program since it launched at the Los Angeles Police Department’s 77th Street jail last summer declined to participate in it, the LAPD figures show. Dozens of others have failed to comply with the program’s requirements.

Only 17 people have completed the program.

The unwillingness of so many adults to enter into a program that would spare them from criminal charges and potential jail time reflects a broader, ongoing struggle by officials and lawmakers to find effective solutions to the intertwined calamities of mental illness, drug addiction and homelessness carrying out across the county and state.

Under the program, when mentally ill, addicted or homeless people who don’t have a record of violent crimes are arrested for some types of nonviolent offenses — such as prostitution, simple drug possession, trespassing or petty theft — they are given the choice to enter the diversion program or face prosecution.

People who choose diversion are connected with one of several community-based organizations that help get them a range of services, including treatment and housing.

People arrested for misdemeanor crimes, which are prosecuted by the city attorney’s office and account for the vast majority of the offenses that make someone eligible for the diversion program, must remain in the diversion program for 90 days. Those arrested for felonies, which are handled by Los Angeles District Attorney George Gascón’s office, must agree to remain in the program for 180 days.

Prosecutors and police track individuals’ progress and can still file criminal charges if someone fails to adhere to the program’s requirements.

LAPD Deputy Chief Kris Pitcher, who oversees diversion programs for the department, said that although the adult program has had some successes, he believes it has been “largely hampered” by policies put in place by court officials and Gascón.

The largest factor, he said, is the court’s pandemic-related decision to do away with cash bail for people charged with minor offenses like the ones included in the diversion program. Under that policy, people who might have been unable to afford bail and so remained in jail before the pandemic now are released quickly to await trial.

For many of the people eligible for diversion, a quick release — even if it leaves criminal charges hanging over their heads — is more attractive than entering into a monthslong treatment program, Pitcher said.

“The individuals who are brought in believe they will be released very quickly, which they are,” Pitcher said. “The court’s zero-bail practice is wreaking havoc on this program.”

To a much lesser degree, Pitcher said people turning down diversion have expressed doubt that prosecutors in Gascón’s office will even file charges against them on the minor offenses for which they were arrested, or that, if they do, they also won’t seek bail in accordance with the office’s more lenient policies under Gascón.

It’s likely that some of those eligible for the diversion program would have been released without bail before the pandemic rules went into effect, but Pitcher said it is unclear how many.

In a statement to the Los Angeles Times, Gascón’s office said it is “unconstitutional to use unaffordable bail or pretrial incarceration simply to coerce people into treatment,” and that officials in L.A. should be looking to expand treatment alternatives “instead of relying on the criminal legal system to provide health care, substance use disorder treatment and housing assistance, as it will never solve those problems.”

Advocates for people suffering from mental illness and addiction and others who study such programs argue there are many reasons why people may not want to commit to a diversion program with extensive time commitments, particularly when it is run by a law enforcement agency.

Antionette Dozier, a senior attorney with the Western Center on Law and Poverty, said people may decline diversion because of work or childcare issues, or because of concerns that such programs won’t be conducted in a culturally sensitive way.

And Gary Blasi, a professor emeritus at UCLA law school and counsel to the Western Center, said whether such programs work “always depends on whether, from the point of view of the person involved, the alternative offered is better.”

Although many homeless people will accept some offers of housing, they often don’t want to be placed in settings where they have little or no privacy or autonomy, Blasi wrote in an email to The Times. Many poor people, he said, “have the experience of being offered ‘services’ of little value that consume more of the recipient’s time and energy better spent dealing with survival needs on their own.”

People’s choices “make sense if you stand in their shoes,” Blasi wrote.

The diversion program’s struggles are playing out against the backdrop of an equally tumultuous debate at the state level.

Gov. Gavin Newsom recently proposed a controversial plan to allow judges to compel people with serious mental illness and addiction to receive treatment. It has the support of policymakers and family members of mentally ill people who believe the state should be more proactive in helping people in the most need instead of waiting until they commit a crime and are jailed.

Others, however, saw the governor’s proposal as an extreme overreach and see any state-backed effort to force sick or addicted people into treatment as inappropriate. They argue there are better ways to help people out of crises, namely by offering better, more attractive services and housing than many programs currently provide.

While the LAPD’s diversion program, which is part of a countywide effort launched in 2020 to develop alternatives to incarceration, is not mandatory, it is designed to cajole people into accepting treatment and housing at a moment when they are facing potential jail time.

The fact that so many eligible people have refused the program has left police questioning its viability, and there are no plans to expand it beyond the 77th Street jail, Pitcher said.

In contrast, department officials remain bullish about a similar diversion program for juveniles, which operates citywide and provides kids with mentoring, tutoring and other services as opposed to sending them to jail, Pitcher said.

That program, too, has come under fire over the years from critics, including before the Police Commission in 2020, who argued the LAPD was too restrictive about which offenses qualified for the program. Some youth advocates argued the LAPD should cede control of it to county agencies.

The Police Commission at the time called on the LAPD to reverse a rule that barred children with alleged gang ties from the program. Last Tuesday, police officials said they had done so — and that participation rates among eligible youths are high.