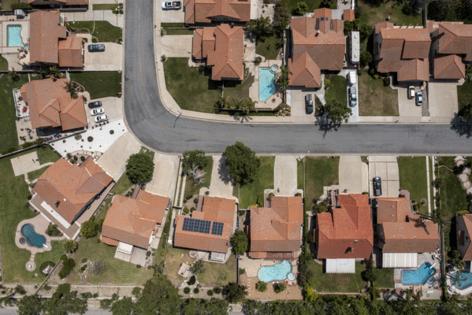 As with nearly every other facet of the rollout, the agencies affected by the Metropolitan Water District of Southern California's urgent call for conservation are each taking a slightly different tack as they implement water conservation plans.

While most are limiting outdoor watering to one or two days a week, many said the rules governing pools will remain largely unchanged — at least for the time being. That's left some residents scratching their heads and others complaining of mixed messaging during a time of worsening drought.

"There seems to be a discrepancy between outdoor watering restrictions and the ability to keep pools filled," said Alhambra resident Chase Andre, 35. "Water is a public utility, but private pools are not. If we recognize that the drought is affecting our water supply enough to limit watering plants and lawns, it seems reasonable to consider how private pools might be working against our collective conservation efforts."

Not everyone agrees. In a letter to the Las Virgenes Municipal Water District — an MWD-member agency that serves customers in Calabasas, Agoura Hills and other nearby areas — the California Pool and Spa Assn. said prohibiting the filling of pools would be, "at most, a symbolic gesture."

"Pools use very little water and, as such, there is no basis in fact or science that would indicate that banning the filling of swimming pools would have anything but a de minimis impact on water conservation," the letter said.

According to the association's government relations officer, John Norwood, a new swimming pool requires an average of 14,000 to 18,000 gallons of water to fill, amounting to "a fraction of 1% of the city's annual water use" when taken as the sum of all new pool permits annually.

Pools and their surrounding hardscaping also save water over time, Norwood said, because they often take the place of thirsty lawns — "thus saving the water that used to be used to irrigate what the pool replaces."

"There is simply no evidence that such a restriction saves any water, especially over the long term," he said.

But for some residents, those calculations don't always make sense.

"It looks real bad when you read about houses with five swimming pools and big, vast, green lawns continuing to be able to water whilst we're in restrictions," one resident, Michael Margolis, said during a town hall meeting with Las Virgenes on May 11, adding that it's not just state supplies but also federal supplies from the Colorado River that are running dangerously low.

Some water agencies in the region are taking steps to regulate pools, but many, including the Los Angeles Department of Water and Power, are stopping at pool cover recommendations.

"During Phase 3, you will be able to fill your pool, but it is strongly recommended that you use a pool cover to prevent evaporation whenever the pool is not being used," DWP spokeswoman Ellen Cheng said. "This will greatly reduce the evaporation from your pool."

Cheng said the next highest phase, Phase 4, would make covering residential pools a requirement, while Phase 5 would prohibit filling them with water.

Still, she said, "we are asking our customers to reduce their water use wherever possible. The more water we save, the longer these limited supplies will last."

The phases apply to residential and commercial customers alike, Cheng added, so community pools will be subject to the same rules.

The Las Virgenes Municipal Water District is also asking residents to consider the use of a pool cover as it rolls out its plan for a 50% reduction in outdoor water use, said spokesman Mike McNutt.

McNutt said pools are already factored into outdoor water budgets, meaning those with full pools should be able to keep them that way. Residents constructing new pools should alert the district, he said, and those who are considering emptying and refilling pools for repairs or other reasons are asked to defer "until this emergency is over."

He also acknowledged that adjusting to strict conservation requirements is a process that will require all Southern Californians to reconsider their relationship with water.

"Behavior modifications take time — sometimes very long," McNutt said. "The problem is time is not on our side. Climate change is here, and we are all adapting to it right now. Planning and adaptation are on the same timeline. We are forced to do them simultaneously."

Other agencies are taking things a step further, including some retailers that purchase supplies from MWD members.

Ventura County Public Works, which receives some water from the Calleguas Municipal Water District, is prohibiting filling new residential pools and refilling existing pools with more than one foot of water, according to its website. (Residents who already have approved permits for new pools and spas are exempt.)

But the nearby Triunfo Water and Sanitation District, which also receives water from Calleguas, does not include pools in its current Stage 1 ordinance. However, it does say it will prohibit "the filling or topping off of any new or existing residential pools" in Stage 2.

Others follow similar patterns. The Upper San Gabriel Valley Municipal Water District "does not have any specific restrictions on new construction of pools, repairs or refill," said spokeswoman Patty Cortez, but allows each of its member agencies to set rules at a local level.

One such agency, Golden State Water Co. — a supplier for state water-dependent areas in Claremont and Simi Valley — does not mention pools in its current ordinance calling for a 20% reduction and one-day-a-week watering. Instead, customers will "need to manage all usage (indoor and outdoor including pools) to avoid the [overuse] surcharge," general manager Benjamin Lewis wrote via email.

The Inland Empire Utilities Agency, an MWD member based in San Bernardino, is also leaving it up to local retailers to choose their own course of action. That could include "partial or total prohibitions against using hoses to wash paved areas, limits on car washing and filling or refilling swimming pools, and restrictions on watering times," IEUA spokesman Andrea Carruthers said.

Some people such as Andre, the Alhambra resident, are hoping officials will take that responsibility to heart. Though he lives in a condo where his outdoor water use is already limited, he said he is looking into purchasing water-saving shower heads to cut back on his use indoors.

And though he has enjoyed community pools with his kids, he encouraged "those in charge to continue to find ways to do more."

"When I think of water conservation, I don't think of taking water from my neighbors but leaving water for my children," he said. "It may be that the weather will shift, or new technology developed, and our water supply will return. But until it does, what kind of L.A. do we want our kids to inherit?"