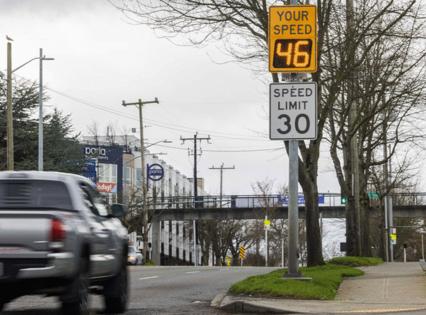 SEATTLE — Gan Hao Li rode his bike every day, sometimes two or three times. And every day on his way out the door, he'd smile and wave to Marena Ostbo, the manager of Hirabayashi Place in Seattle's Chinatown International District. Wednesday, May 10, was no different.

Except this time, Li, 73, didn't return. He was killed around 10:30 that morning in Sodo, when a Jeep driver pulled out of a parking lot on Fourth Avenue South and South Holgate Street and hit him, according to the Seattle Police Department. Li died of his injuries later that day. Police are still investigating.

Ten people have been killed on Seattle's roads in 2022, according to the Seattle Department of Transportation, outpacing the number of deaths at this time last year and the year before. At least 59 people have been seriously injured.

Although fewer people die on Seattle's streets than Portland's or Austin's, for example, the trends of the last two years have yet to reverse themselves in 2022 and Seattle's "Vision Zero" goal of no fatalities on the roads remains maddeningly out of reach. Despite recent efforts, the combination of speed, larger vehicles and infrastructure that's unfriendly to people outside of cars has meant deaths continue to rise.

"It's really frustrating and devastating," said Allison Schwartz, SDOT's Vision Zero coordinator. "And that's just for someone who reads the collision reports and is trying to make a dent in this issue with my team and with others in the department, you know? It's hard to think about what the people closest to those who've been killed or hurt are going through."

On the heels of one of the worst years for traffic deaths in Seattle — and across the country — four pedestrians have been killed so far this year and Li is the second bicyclist. The first, Antonio Tiongco, was also hit on Holgate, just a block away on Third Avenue South.

That the two bicyclist deaths occurred in the city's main industrial district is no coincidence, said Clara Cantor, community organizer for Seattle Neighborhood Greenways. Since at least 2004, more serious injuries and deaths have occurred there than in any other Seattle neighborhood, despite having fewer total collisions than downtown.

"It's like every single year there are people that are dying in Sodo because of how unsafe the streets are," Cantor said. "Because it's such an intense freight corridor, very little has been done there to improve safety for people walking and biking."