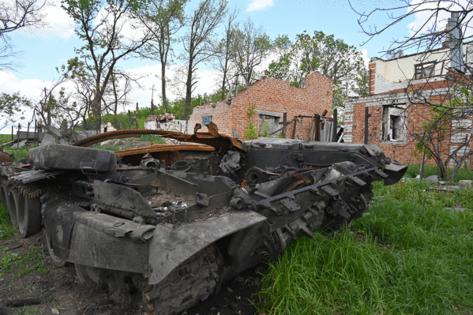 BUCHA, Ukraine — Russian troops continued their offensive into the Donbas region on Saturday, aiming to encircle the easternmost point of Ukrainian control in what one official said would be a repeat of Moscow’s assault on the beleaguered city of Mariupol.

Meanwhile, Moscow cut off natural gas exports to Finland and the Russian defense ministry said it destroyed a consignment of U.S.- and European-supplied weapons meant for Ukrainian fighters in the Donbas.

On Saturday, Luhansk Gov. Serhiy Haidai said Russian troops were throwing “all their forces and efforts” into assaulting Severodonetsk in Luhansk province, aiming to cut off the main supply route to the city. Six people were killed and three others wounded in Russian attacks on Severodonetsk, Hadai said, along with at least two others killed in shelling on neighboring towns.

“The Russians are destroying Severodonetsk, like Mariupol. The enemy’s plans are to surround the area or turn it into a fire … ,” Haidai said in a statement on Telegram on Saturday, adding that Ukrainian forces had defended the city against 11 enemy incursions.

A Russian breakthrough in Luhansk would enable an attack on Donetsk and Kharkiv provinces, he added.

“This is the difficult fate of Luhansk region, not to allow the Russians to move forward,” he said.

The grinding advance in the east comes one day after Russia claimed its biggest victory in its almost-three-month assault: the full capture of the Azovstal steelworks plant, the labyrinthine underground network of tunnels that became Ukraine’s last stand in the Black Sea coastal city of Mariupol, along with the surrender of what the Russian defense ministry said were 2,439 Ukrainian fighters.

Although Kyiv said it would bring back its troops via prisoner exchanges, the Kremlin has yet to comment on their fate. In recent days, Russian lawmakers in the Duma called for prison terms and even capital punishment for members of the Azov Regiment, a far-right Ukrainian military unit with neo-Nazi roots whose fighters emerged as the Azovstal plant’s most stubborn defenders.

Mariupol has been a target of Russia’s invasion virtually from the start of the war. As the rest of the city fell into Russian hands, a ragtag assortment of Ukrainian troops and civilians bunkered in the steelworks even as their adversaries maintained a relentless siege — not to mention continuous bombardment — on the plant. Women, children and elderly people were first bused out before Ukrainian authorities ordered the remaining troops to surrender.

Earlier, Denis Pushilin, self-proclaimed leader of the separatist Donetsk People’s Republic, said the Azovstal plant would be demolished and replaced with either a park, a residence or what he called a techno park.

At a cemetery in Bucha — the suburb of Kiev now infamous for alleged Russian war crimes — many families took time on Saturday to visit the graves of relatives and friends lost in the war. Many mourners at the city cemetery described what they viewed as the heroism of the Ukrainian defenders of Mariupol, who held off a superior Russian force for weeks.

“They are our heroes, they fought to the end,” said Anton Adoniev, 26, who visited the grave of a soldier from Bucha who recently was killed in the Donbas. “We all have faith that Ukraine will triumph in the end.”

“Payments for gas supplied from April 1 must be made in rubles … which the counterparties were informed of in a timely manner,” Gazprom said, according to a report from Russian state news operator TASS.

The cutoff comes days after Finland and Sweden reversed a decades-old policy of neutrality and sought to join NATO.

“It is highly regrettable that natural gas supplies under our supply contract will now be halted,” Gasum Chief Executive Mika Wiljanen said in a statement.

“However, we have been carefully preparing for this situation and provided that there will be no disruptions in the gas transmission network, we will be able to supply all our customers with gas in the coming months.”

And in another sign of the war’s increasing fallout beyond Ukraine’s borders, British Foreign Secretary Liz Truss said the small country of Moldova southwest of Ukraine should be equipped “to NATO standard” militarily so as to repulse any Russian aggression.

Speaking to the Telegraph newspaper on Saturday, Truss said Ukraine should be “permanently able to defend itself” along with “vulnerable states” such as Moldova.

“I would want to see Moldova equipped to NATO standard,” she said. “This is a discussion we’re having with our allies.”

She added that Russian President Vladimir Putin “has been clear about his ambitions to create a greater Russia,” which would presumably include parts of Moldova, which like Ukraine is a former Soviet republic.

“And just because his attempts to take Kyiv weren’t successful doesn’t mean he’s abandoned those ambitions.”

“High-precision, long-range, sea-based Kalibr missiles in the area of the Malyn railway station in the Zhytomyr region destroyed a large batch of weapons and military equipment delivered from the United States and European countries,” Konashenkov said in a statement Saturday.

Malyn is about 60 miles northwest of Kyiv. Konashenkov said the weapons and materiel were to go to Ukrainian troops in the Donbas.