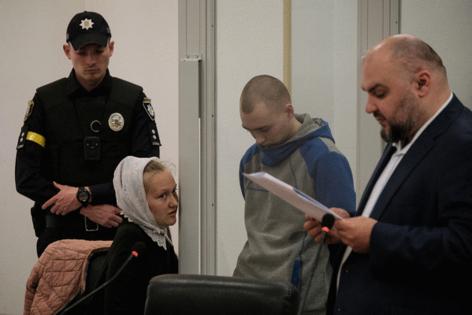 KYIV, Ukraine — With its grip tightened along Ukraine’s southern coast, including full control of the steel plant that held the world’s attention for months, Russia redoubled its assault Friday on the eastern industrial heartland known as the Donbas.

At least a dozen people were killed and scores of homes destroyed in the area of Severodonetsk, the regional governor, Serhiy Haidai, said on social media. The city is the easternmost point of the Donbas still in Ukrainian hands.

In a separate airstrike, about 120 miles west in the Kharkiv region, a Russian missile destroyed the newly renovated Palace of Culture in the city of Lozova.

Russian military authorities also made their biggest victory of the war official on Friday, announcing that Russian forces in the southern port city of Mariupol had “completely liberated” the sprawling Azovstal steelworks, where thousands of Ukrainian fighters had hunkered down for more than two months in a long and bloody standoff.

Maj. Gen. Igor Konashenkov, spokesman for the Russian Defense Ministry, said that all Ukrainian fighters had been removed from the underground bunkers of the factory, according to Russia’s state news agency RIA Novosti.

There was no immediate confirmation from Ukraine.

“I hope soon relatives and the whole of Ukraine will be able to bury their soldiers with honors,” Prokopenko said in a video posted on Telegram.

Despite some battlefield successes, the growing war of attrition has exacted a grievous toll on Ukraine’s civilians and infrastructure, with people killed or maimed, houses pulverized and power cut off in hard-hit communities.

In a Friday night video address, Ukrainian President Volodymyr Zelenskyy urged Western allies to hold Russia financially responsible for the devastation it was wreaking across his country.

“Every burned house. Every ruined school, ruined hospital,” he said. “Each blown-up house of culture and infrastructure facility. Every destroyed enterprise. Every shut-down business.”

Russian funds and property under the jurisdiction of allied countries, Zelenskyy said, must be “seized or frozen” and then distributed to a special fund for Ukrainian victims.

“That would be fair,” he said. “And Russia will feel the true weight of every missile, every bomb, every projectile it has fired at us.”

To bolster Ukraine’s defense, the U.S. Senate approved $40 billion in new aid on Thursday, sending the package to President Joe Biden for his promised signature. In addition, Germany’s finance minister said Friday that the Group of Seven leading industrialized nations would allocate $19.8 billion in aid as part of what the G-7 declared was its commitment “to our united response to Russia’s war of aggression against Ukraine and to our unwavering support to Ukraine.”

Western military and humanitarian assistance have been crucial to Ukraine’s ability to defy an enemy whose military might, both in personnel and weaponry, dwarfs its own.

Russian President Vladimir Putin on Friday accused Western countries of mounting a “serious,” though ultimately unsuccessful, campaign of cyberattacks against his country.

“A true aggression has been initiated against Russia, a war in informational space,” Putin said to members of Russia’s Security Council, according to Russian state news agency Tass. “That cyberaggression against us, as well as the overall sanctions attack on Russia, has failed.”

The Kremlin has warned of reprisals against countries rallying behind Ukraine. On Friday, Finland’s state-owned natural gas wholesaler, Gasum, said Russia’s state energy company, Gazprom, had announced that it would halt supplies to the Finnish company starting Saturday.

The cutoff comes just a few days after Helsinki submitted its application to join the North Atlantic Treaty Organization, a move that ends decades of official military nonalignment and incenses Moscow. Last month, Gazprom also shut off supplies to Poland and Bulgaria over their refusal to pay for the gas in rubles, which would help prop up the beleaguered Russian currency, instead of in the dollars or euros specified under contract.

Gasum Chief Executive Mika Wiljanen told customers that the company had “been carefully preparing for this situation” and should be able to keep the pipelines running.

With the conquest of Mariupol, Moscow now controls access to the Sea of Azov.

That has had disastrous effects on Ukraine’s economy, particularly its ability to export the grain that millions of people around the world depend on for food. Officials said the loss in trade and the costs of war have contributed to a budget deficit of $5 billion. And reduced exports and rising prices for wheat have worsened food insecurity in Egypt, Pakistan and elsewhere.

At a United Nations Security Council meeting Thursday to address the crisis, U.S. Secretary of State Antony J. Blinken said the food supply for millions of people worldwide was being “held hostage by the Russian military” — an accusation that Russian officials dismissed as a lie. U.N. Secretary-General Antonio Guterres said he was trying to negotiate a plan to move Ukrainian food exports out through the Black Sea.

Valeriy Zaluzhny, the commander in chief of Ukraine’s armed forces, told journalists that his troops have so far managed to keep the key Black Sea port of Mykolaiv, west of Crimea, under Ukrainian control.

Ukrainian forces are also pushing southeast toward Kherson, the first city to fall after the war began Feb. 24, amid growing signs that Russia is planning to annex parts of the region, including the city of Melitopol, where the occupiers are reportedly introducing the use of the ruble in place of the Ukrainian hryvnia.

Fears remain high for the Ukrainian soldiers captured in Mariupol who Moscow now says number more than 2,000. Ukrainian officials have declined to give a precise figure. Transferred to a penal camp in Russian-controlled territory, many are severely injured and face deep hostility from Russian soldiers and politicians, who have branded the Azov regiment as “Nazis” deserving trial and punishment.

The International Red Cross says it has registered as prisoners of war hundreds of troops evacuated from the massive steel plant.

Earlier this week, the government in Kyiv said it was giving up the fight for the devastated city, but a band of diehard soldiers remained holed up in the plant.

Completing its takeover of Mariupol allows Russia to continue moving troops to the Donbas, now the focus of its offensive after its failure to capture Kyiv or the northeastern city of Kharkiv. But having been tied up so long in Mariupol and suffered losses, the forces there “must be re-equipped and refurbished before they can be redeployed effectively,” which can be a lengthy process, Britain’s Ministry of Defense said in its daily assessment of the war.

The British government reported earlier that a number of senior commanders had already been relieved of their posts, including Lt. Gen. Serhiy Kisel, whose fighters were unable to subdue Kharkiv. Vice Adm. Igor Osipov, the head of Russia’s Black Sea fleet, has also likely been suspended following the sinking of the flagship cruiser Moskva last month, a stunning victory for Ukraine that was aided by U.S.-provided intelligence.

“A culture of cover-ups and scapegoating is probably prevalent within the Russian military and security system,” the British Ministry of Defense said. “Many officials involved in the invasion of Ukraine will likely be increasingly distracted by efforts to avoid personal culpability for Russia’s operational setbacks.”

(McDonnell reported from Kyiv and Chu from London. Times staff writer Jenny Jarvie in Atlanta contributed to this report.)