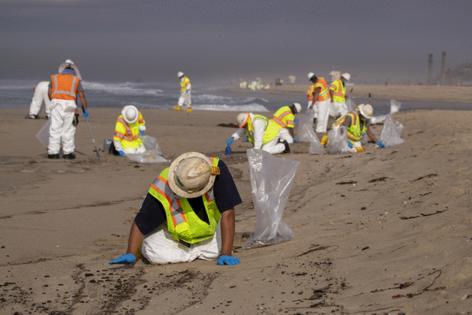 Senate Bill 953 would have allowed the State Lands Commission to terminate offshore oil leases by the end of 2024 if the agency was unable to negotiate voluntary buyouts with the petroleum companies operating the oil platforms. The legislation focused solely on the three oil leases in state waters adjacent to Orange County, not the 23 oil rigs in federal waters along the rest of California’s coastline.

The measure was introduced by state Sen. Dave Min, a Democrat, after an October oil spill off Huntington Beach dumped an estimated 25,000 gallons into the ocean. Investigators suspect it was caused by a cargo ship anchor that snagged a 17-mile-long pipeline stretching from an oil platform that operates in federal waters to the Port of Long Beach.

Min called offshore oil production a serious threat to California’s $44-billion-a-year coastal economy, as the October spill proved. Not only were beaches closed, hurting local restaurants and other businesses, but the spill forced the cancellation of the final day of a popular air show.

Min’s bill died Wednesday in the Senate Appropriations Committee, a gatekeeper panel that sifts through hundreds of bills and decides whether legislation with a fiscal cost to the state will advance to the full Senate. Min’s bill did not come up for a vote which, in effect, killed the measure the day before the deadline by which bills must move forward.

Afterward, Min said that he was “disappointed” with the outcome but will not give up.

“I will continue to explore all mechanisms and pathways to try to remove oil rigs off the coast of California,” Min said in a statement. “The aging infrastructure of these offshore platforms means they are ticking time bombs. Another oil spill — and all of the associated environmental and economic damage — is inevitable unless we act now.”

Min knew the bill faced serious perils, even in a Legislature dominated by Democrats and at a time with California as a national leader in pushing for a transition to a renewable energy-based economy and reducing the reliance on oil and gas.

A number of Senate Democrats earlier expressed concern about the potential financial liability the state faced if the oil leases were terminated, a price tag that could run into the hundreds of millions of dollars. Ending those leases also would likely be considered in the courts as a “taking” by the state, since the oil leases in question were legally obtained, and the matter could turn into an expensive battle in court.

State Sen. Susan Talamantes Eggman, a Democrat, voted for the bill when it came before the Senate Natural Resources and Water Committee in April but at the time warned she might rescind her support if those issues were not resolved. She also balked at handing the task to the State Lands Commission, saying in her experience that “big bureaucracies don’t solve our problems.”