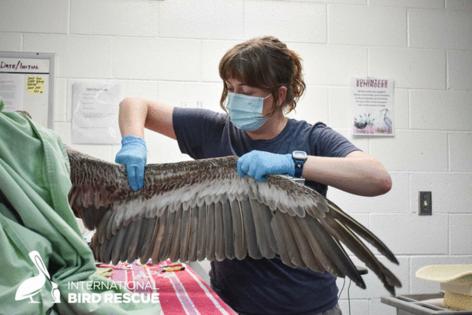 Some of these large birds — known for their distinctive oversized bills — arrive with fractures, likely hit by cars, while others have multiple fish hooks and fishing lines tangled around their bodies, officials said. Many are emaciated and starving.

There is no clear answer as to why so many birds are sick and dying, and state officials are scrambling to perform tests on dead birds to provide some clarity.

More than a hundred birds are being treated at the nonprofit International Bird Rescue's center in San Pedro in Los Angeles County. Some birds are brought to the center from as far north as Santa Barbara and as far south as San Diego. Typically, such facilities take in a few birds for rehabilitation, but the volume of sick and dying birds over the last several days is alarming veterinarians.

"They talk about the canary in the coal mine. This is the sea bird in the ocean bringing a message that things are not quite right," International Bird Rescue Chief Executive JD Bergeron said Thursday.

Sick birds, too weak to fly, are being found with various injuries and too little body fat, officials said. Some early theories are that the birds are being hurt by overfishing in the Pacific Ocean, but rescue operators have been assured by state agencies that local sardine and anchovy populations are not scarce.

The California Department of Fish and Wildlife will be performing tests on the dead birds in the coming days.

"CDFW is aware of reports of an increased number of sick and dying brown pelicans in Southern California," Fish and Wildlife spokesperson Tim Daly said in a statement. "We are working quickly to receive some carcasses so we can perform necropsies at the department's Marine Wildlife Veterinary Care and Research Center and the Wildlife Health Laboratory. Until information on cause of death is available, we are unable to provide a likely cause of this problem."

"About 40%, maybe more, are not making it past that first hour when they come in," McGuire said. "We're feeding them, deworming them and making sure they're taken care of. A lot of them have fishing gear entanglement and others are coming in with low body weight and poor body conditions."