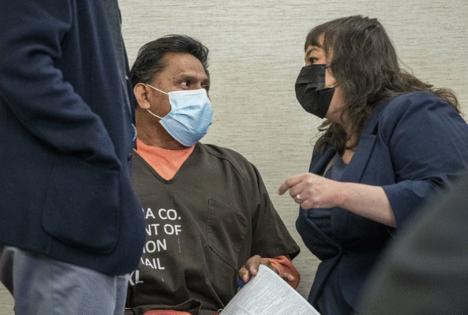 SAN JOSE, Calif. — The grandfather and uncle allegedly involved in the exorcism death of 3-year-old Arely Naomi Proctor in September will remain in jail for at least another month, following a court appearance Thursday in which attorneys signaled they would consolidate the case with that of Arely’s mother, Claudia Hernandez. All three defendants have been charged with child abuse leading to the death of the girl.

Attorneys for Rene Trigueros Hernandez, 59 — also known as Rene Huezo — and Rene Hernandez Santos declined to submit a bail motion Thursday. They are all scheduled to return to court on June 13.

The short hearing Thursday came a week after Arely’s grandfather and uncle were arrested in connection with her alleged exorcism death during a ritual in September 2021. Authorities allege that Arely suffered over twelve hours of ritual abuse from her grandfather, uncle and mother because they believed she was possessed by demonic forces after the girl would not stop screaming and crying.

All three family members are currently in jail and could face 25 years to life in prison on charges of child abuse leading to death — charges filed more than seven months after Arely died in an apparent exorcism by her relatives to rid her of “evil spirits” at the San Jose church.

Huezo, who is the leader of Iglesia Apostoles y Profetas, the churchwhere Arely died, and his son, 19, were arrested Wednesday and arraigned Friday. Claudia Hernandez, 25, was arrested Jan. 31. Prosecutors do not suspect that the girl’s father was involved.

The arrests came after a report from this news organization revealed that Huezo had indeed performed an exorcism on the girl.

In an interview at a Sunday evening church service before his arrest, Huezo confirmed that they performed a ceremony on the child to “liberate her of her evil spirits,” adding that her death was “the will of God,” and not the consequence of an exorcism.

“If you read the Bible, you’ll see that Jesus casts away demons and made sick people healthy again,” he said. “It’s not when I want to do it, it’s when God, in his will, wants to heal the person. The preacher is like an instrument of God; what we do is what God says.”

Looking visibly anxious and upset, Huezo said that he feels a lot of pain at the death of his grandchild. “It’s difficult for people to understand what happened, he said, but “it’s the stuff of God, and everything is in the will of God no matter how small or big.”

Wise said the new charges resulted from a coroner’s report that authorities said gives disturbing insight into the physical abuse inflicted on Arely. The Santa County Medical Examiner-Coroner’s Office declined to release that report or confirm when its determinations were made, citing the ongoing case against the relatives.

Arely’s death only came to light this month after San Jose police searched the church where the exorcism occurred while looking for a kidnapped 3-month-old boy, who was allegedly taken by a member of the church. San Jose police declined to specify why they waited so long to make last week’s arrests, or why they did not disclose Arely’s death back in September.

Among the explosive revelations from interviews conducted by SJPD following the release of the coroner’s report include details on how the 3-year-old “was strangled multiple times to the point of unconsciousness, she had fingers shoved down her throat to the point she had multiple injuries to her mouth and to her tongue, and she had pressure put on her body, on her torso from the front and back, with so much force applied that she lost consciousness,” according to the criminal complaint.