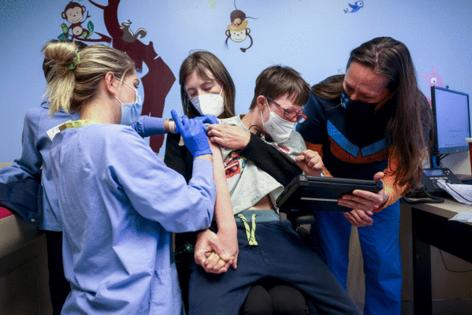 DENVER — Colorado should expect COVID-19 infections and hospitalizations to keep rising for a few weeks, and while state officials aren’t expecting anything close to last winter’s surge, hospital capacity could become a problem if large numbers of health care workers are out sick.

State epidemiologist Dr. Rachel Herlihy noted COVID-19 infections and hospitalizations have been rising, as have the percentage of tests coming back positive and the amount of virus found in wastewater samples. The state’s modeling team projected a peak in mid-June, assuming current trends continue.

“All of our data shows an increase in transmission,” she said. “Our health care providers and our health care facilities could see some stress in the coming weeks.”

Hospitalizations are expected to peak somewhere between 500 and 800, depending on whether the ascendant BA.2.12.1 variant is better at getting around the immune system than previous versions of omicron.

That’s far below the level seen in January, when they peaked at 1,676, but there could be some strain on the health care system if staff can’t work because they’re infected, said Scott Bookman, the state’s COVID-19 incident commander.

About 60% of people hospitalized with COVID-19 are there primarily for the virus, Herlihy said. The others may be there for something completely unrelated, though in some cases it’s difficult to untangle whether an infection might have worsened someone’s preexisting conditions.

According to the latest data, BA.2 accounts for the majority of cases in Colorado, but its more-contagious cousin BA.2.12.1 is gaining steam and caused about 39% of cases with genetic sequencing as of May 1.

The BA.4 and BA.5 variants, which have taken off in South Africa, account for about 0.8% and 0.4% of cases in Colorado, and it’s not clear if they’ll be able to compete with BA.2.12.1, Herlihy said. So far, none of the emerging variants appear to be more severe than the first version of omicron.

Herlihy encouraged Coloradans to consider taking precautions, especially if they have graduation parties or vacations coming up that they don’t want to miss because of an infection. It’s a good idea to wear masks indoors, practice some social distancing and get tested before and after gathering, especially if you’re going to be near someone at high risk for severe disease, she said.

Ahead of Memorial Day weekend, the Centers for Disease Control and Prevention urged anyone taking public transportation to test for COVID-19 before leaving. Travelers should test no more than three days before they’re scheduled to depart and consider testing again after they return, especially if they’ve been in a crowded space without a mask, according to the guidance. International travelers have to get tested no more than one day before flying.

Bookman urged the public to order more at-home tests through the U.S. Postal Service’s third round of distribution, which started Monday. He also asked Coloradans to report any results at covidbinax.colorado.gov. Relatively few people have reported their results

“Testing is not just for people who are feeling sick,” he said.

The CDC is expected to consider recommending third vaccine doses for children 5 to 11 in the coming days, since the U.S. Food and Drug Administration authorized them earlier this week. A decision on shots for toddlers isn’t expected until at least mid-June.

Diana Herrero, deputy director of disease control and prevention at the Colorado Department of Public Health and Environment, said the state has enough shots on hand to offer third doses to children who had their second shot at least five months ago.

“There’s plenty of supply,” she said.

The Cuban Coast Guard was recently involved in two shootouts at sea with speedboats coming from the United States to pick up Cuban migrants, resulting in the death of one of the smugglers, according to the island’s ...Read More

With one foot in the door on European Union membership, Ukraine’s leadership is feeling if anything even more bitter about NATO as the military alliance gathers in Spain for its annual summit.

Ukraine is told “you are...Read More

TAMPA, Fla. — Florida has recorded 17,000 unexpected or excess deaths from preventable health issues other than COVID-19 since the start of the pandemic.

Some were likely because the pandemic led people to put off ...Read More

Dozens of homeowners in Coral Gables and Miami awoke Tuesday to plastic bags filled with candy corn and pictures of Disney characters on their front lawns.

But the package wasn’t meant as a gift. It was a blatant ...Read More

Finland and Sweden took a major step on their way to NATO membership after Turkey dropped its opposition to their bids, all but ensuring the military alliance’s expansion on Russia’s doorstep.

The move “sends a very...Read More