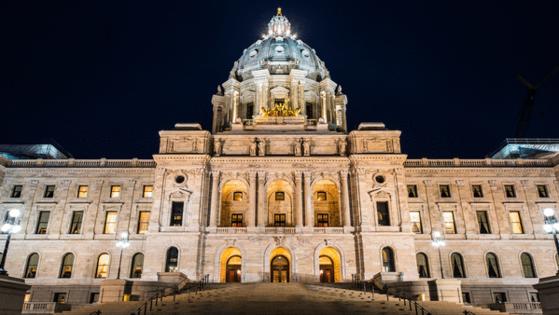 ST. PAUL, Minn. — The Minnesota Capitol was briefly locked down Wednesday night when a 15-year-old driver of a stolen vehicle struck a squad car, and he and the passengers ran, according to St. Paul police.

Three tried to hide in a portable toilet in the area of the crash at University Avenue and Park Street near the Capitol, and the driver ran into a building, said Steve Linders, a police spokesman.

At the time, the House of Representatives floor session was underway. They went into recess, and legislators and staff were asked to remain in the chamber.

Police took the three males into custody who’d gone into the porta-potty — 12, 13 and 15-year-olds, Linders said. The suspected driver was found at Sherburne Avenue and Rice Street, at an address listed as an apartment building.

The lockdown at the Capitol complex was lifted after about 15 minutes.

The situation began when officers saw two stolen cars at Blair and Western avenues in Frogtown at about 7:20 p.m. There were teenage passengers hanging out the windows and the teen behind the wheel of one of the cars was driving recklessly, Linders said.

Officers tried to pull them over, but they drove away. Police did not pursue, based on St. Paul police policy.

A Minnesota State Patrol helicopter tracked the vehicles from the air as they drove to Woodbury. Law enforcement put out stop sticks, which the Hyundai Sonata — stolen from St. Paul — went over and crashed, according to a police report.

Three juveniles jumped out of that vehicle and into a Honda Accord, which had been stolen in Edina. They drove back to St. Paul and the driver rear-ended a marked St. Paul squad car at about 40 mph near the Capitol, Linders said. The officer did not immediately report being injured.

The teen drove into a nearby state of Minnesota parking lot and crashed. Five people ran from the car, and officers took four juveniles into custody.