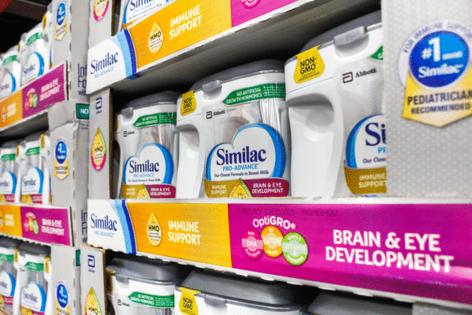 An Abbott baby formula plant in Michigan that’s been shut down since February could be up and running as early as next week, the head of the Food and Drug Administration told lawmakers Thursday.

“I’m pleased to say today we’ve already made significant progress and I think we are on track to get it open within the next week to two weeks, most likely at the outer bound two weeks,” FDA Commissioner Robert Califf told members of a House appropriations subcommittee.

Califf was the first administration official to testify before Congress on the baby formula shortage crisis. He was grilled by a bipartisan group of lawmakers about steps the agency is taking to ease the growing concern of parents across the country who are struggling to find baby formula for their kids.

He was specifically asked about Abbott Nutrition’s plant in Sturgis, Michigan, the largest in the country, which was shut down earlier this year over suspected contamination problems.

The agency began the investigation after reports that four babies, who had been fed the formula, became ill from Cronobacter sakazakii infections.

Abbott has maintained that there’s “no conclusive evidence” to link the illnesses to the bacteria found in the factory, but in February, the FDA warned consumers not to use “recalled Similac, Alimentum, or EleCare powdered infant formulas produced at Abbott Nutrition’s Sturgis, MI, facility.”

The agency is now working closely with Abbott Nutrition to reopen the plant. However, after production resumes, it could still take about two months before the products begin arriving in stores.

“It looks like it is going well, that Abbott has remedied a number of the issues, and we’re going to make sure it gets done as quickly as possible,” Califf said.

On Wednesday, President Joe Biden invoked the Defense Production Act, which allows the federal government to direct private companies to alter their production during emergencies. He also launched Operation Fly Formula, which will allow Defense Department planes to bring baby formula from overseas into the U.S.

“I’ve directed my team to do everything possible to ensure there’s enough safe baby formula, and that it’s quickly reaching families that need it the most,” Biden said in a video shared on social media.