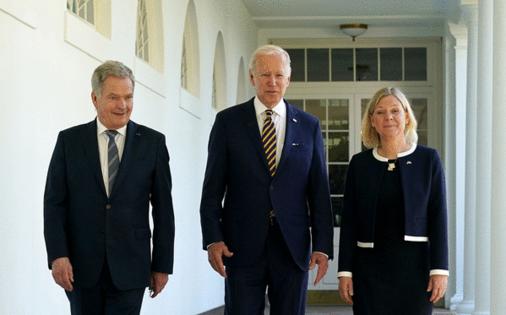 WASHINGTON — President Joe Biden, standing alongside the prime minister of Sweden and president of Finland at the White House on Thursday, declared that the two nations have the “full, total complete backing of the United States of America” in their push to join NATO.

Calling the two countries “close, highly capable partners,” Biden heralded the possible expansion of transatlantic alliance as an affirmation of shared democratic values and the continued strength of the security pact that under its charter considers any attack on a member nation as an attack on all.

“Sweden and Finland have strong democratic institutions, strong militaries and strong and transparent economies, and a strong moral sense of what is right,” Biden said. “They meet every NATO requirement and then some. And having new NATO members in the High North will enhance the security of our alliance, and deepen our security cooperation across the board.”

Biden said he was sending Congress reports on the potential changes to the treaty, which lawmakers must approve, urging them to move quickly.

“The bottom line is simple, quite straightforward: Finland and Sweden make NATO stronger,” Biden said. “And a strong united NATO is the foundation of America‘s security.”

The meeting came just a day after the longtime neutral countries formally applied for membership in the North Atlantic Treaty Organization, the defense pact founded after World War II, though one existing member is seeking to slow things down.

Turkey on Wednesday prevented NATO from initiating the organization’s review process to admit Finland and Sweden. Biden and his aides brushed off the move, expressing confidence that Turkish President Recep Tayyip Erdogan’s objections can be resolved.

Turkish officials have criticized both Nordic countries for placing export bans on some military goods to Turkey and supporting “terrorist organizations,” including the militant Kurdistan Workers’ Party, known as the PKK. Turkey has been battling the PKK, which the U.S. considers a terrorist group, since the 1980s.

Finnish President Sauli Niinistö, who spoke after Biden, addressed Turkey’s concerns and said that discussions with Ankara are ongoing.

“We will commit to Turkey‘s security, just as Turkey will commit to our security. We take terrorism seriously,” he said. “We are open to discussing all the concerns Turkey may have concerning our membership in an open and productive manner.”

LOS ANGELES — The number of coronavirus cases reported in California is on the brink of crossing 10 million, a milestone that probably undercounts the total significantly yet still carries an increasing sense of ...Read More