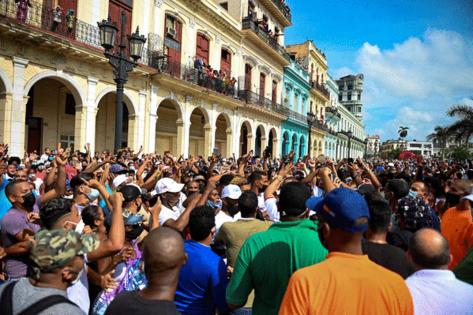 Cuba’s National Assembly has approved a new criminal code that maintains the death penalty for several crimes, punishes criticism of government officials with jail time and makes it illegal for independent media to receive funds from abroad, the latest step in a relentless government campaign to squash dissent following mass protests last year.

The penal code, which takes into effect in three months, “penalizes the most serious violations related to the abusive use of constitutional rights, participation in subversive activities and attacks on information and communication technologies,” said Cuban Supreme Court President Rubén Remigio Ferro, who oversaw the trials against the protesters who took to the streets on July 11 last year.

Many provisions in the new legal framework “appear to be part of an effort to destroy the few freedoms in Cuba that made possible the recent dissident movements in the country, including the historic 11J protests,” said Juan Pappier, senior researcher at Human Rights Watch’s Americas division.

A total of 23 crimes, most of them related to actions against state security, can now be punished by death by firing squad. An official document explaining the changes in the new law says Cuban authorities decided to leave the death sentence for “the most serious crimes” and decided to replace it with life in prison for “common crimes” like rape or child abuse.

Virtually any criticism of the government, its top officials — including Ferro — and socialism in social media or news outlets could land Cubans in prison for up to five years under charges of “propaganda against the Constitutional order.”

Taking note of a similar law passed by the authoritarian government of Nicaragua, which forces independent organizations taking funds from abroad to register as “foreign agents,” Cuban authorities went one step further and declared it a crime to accept funding from any foreign person or entity to conduct “activities against the state and its constitutional order.”

The penal code even overrides the Cuban Constitution, making it a crime punishable by up to 10 years in prison to exercise constitutional rights in efforts to change the government or the constitution.

The provision closes any legal space for peaceful political change in Cuba. It also appears to be a response to events last November, when a petition made by opposition group Archipielago to stage an anti-government public demonstration invoked a constitutional article that recognizes the right to peaceful demonstrations.

The new code also keeps or expands several controversial provisions in the current law, including prison for people who leave the island “illegally,” for example, in a raft; use vulgar language against the island’s handpicked president, Miguel Díaz-Canel and other top officials, or publish “fake news.”

Despite international outcry, the criminal code also keeps the legal age of majority at 16, a provision in the current code that allowed government prosecutors to issue prison sentences to several July 11 demonstrators below the age of 18.

The code approved Sunday also ensures that state institutions and government-sponsored political organizations do not face accountability, as one of the articles shields them from legal liability.

Authorities called the new code “modern.” Activists and independent journalists called it an assault on civil and political freedoms, “a penal code to muzzle us all,” Cuban journalist Yoani Sánchez wrote.

The Committee to Protect Journalists, an independent group based in New York, also condemned the new code as a threat to independent media in Cuba.

“We are alarmed by the passage of Cuba’s new penal code, which further criminalizes the work of independent journalists on the island by banning foreign funding and puts their existence and sustainability at dire risk,” said Ana Cristina Núñez, the organization’s Latin American and the Caribbean senior researcher. “With the new penal code, Cuban authorities continue to build an intricate and perverse legal regime of censorship and deal a devastating blow to independent journalists and outlets.”

On Monday, several Cuban activists and exiles expressed dismay and disappointment at the Biden administration’s announcement of changes in Cuba policy, just a day after the new penal code was approved.

Anamely Ramos, a Cuban art curator linked to the dissident artistic movement San Isidro who was recently refused entry into the country and is currently living in Miami, said the administration rewarded the island’s government with the easing of some sanctions despite the ongoing crackdown.

“New criminal code in Cuba to better repress. More than 1,000 political prisoners. Minors sentenced to more than 15 years. A father in a sit-in demanding freedom. In the midst of this, the United States decides to bet again for the thaw. Shame!” she said.