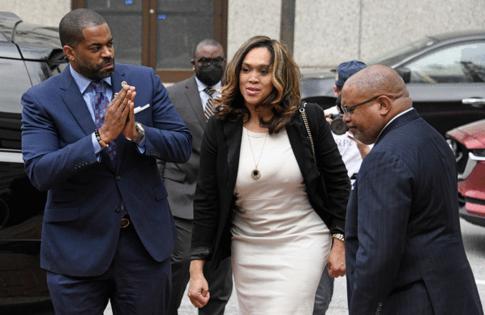 BALTIMORE — Baltimore City Council President Nick Mosby should comply with an ethics board order to return money collected by a legal defense fund established to benefit him and his wife, cease fundraising activities to the fund and produce a list of donors, a group of City Council members said in a letter sent to Mosby Saturday.

The letter, signed by six of the city’s 15 council members — Kristerfer Burnett, Zeke Cohen, Ryan Dorsey, Phylicia Porter, Odette Ramos and James Torrence — echoes the demands of an order issued Thursday by the Baltimore Board of Ethics following a more than eight-month investigation into the legal defense fund.

“We write to express to you our dismay at the ethics board’s findings in their investigation of the Mosby Trust, of which you are a beneficiary, and your financial disclosure,” states the City Council members’ letter, a copy of which was obtained by The Baltimore Sun. “We commend the board’s thorough report and diligent explanation of the law, facts and precedent, making unmistakably clear the violations of the city’s ethics laws.”

The ethics board issued a 17-page ruling Thursday detailing two donations — one of $5,000 and another of $100 — to the fund from city contractors they consider controlled donors. As council president, Mosby oversees not just the legislative branch of government, but also the Board of Estimates, Baltimore’s spending board.

“I am completely perplexed by the board’s findings,” he wrote Thursday. “The board is fully aware that I have never asked, requested, or solicited any person to donate to the ‘legal defense fund.’”

The ethics board gave Mosby 30 days to tell authorities controlling the legal defense fund to stop all fundraising on his behalf, return all donations to controlled donors and provide a list to the board of all donors to the fund. Within 30 days, Mosby must certify to the board in writing “under penalties of perjury” that he has taken all ordered steps and will not accept further payments from the fund.

“The ethics board’s administrative order provides a clear and straightforward path for you to correct your multiple ethics violations,” council’s letter states. “For the sake of the trust and morale of both the public and the City Council, we ask that you immediately and fully comply with the order.”

He has been in the Oakland County ...Read More

SAN DIEGO — The numbers have confirmed what many already suspected.

Homelessness has increased in San Diego County, and it's especially apparent in several cities where tents and makeshift structures fill sidewalks, ...Read More

MIAMI — No unusual cases of severe hepatitis among children have been confirmed in Florida despite a global rise in cases and an ongoing investigation into what’s causing the outbreak, which has affected more than 500 ...Read More

Some coronavirus-positive patients who have completed treatment of the anti-COVID drug Paxlovid are rebounding into illness, and experts are urging people to be cautious if they develop COVID-like symptoms again and become...Read More