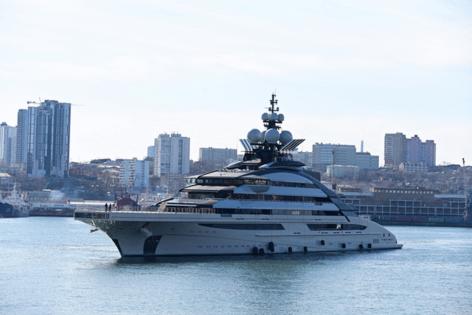 WASHINGTON — Since Russia invaded Ukraine on Feb. 24, the United States and its allies have enacted the harshest sanctions ever imposed on a major power, targeting Moscow’s largest financial institutions as well as foreign reserves, its primary exports, its richest citizens and top government officials.

What makes these sanctions so effective is the continued dominance of the U.S. dollar in global financial transactions along with Washington’s ability to coordinate them with an alliance of nations that, together with the United States, make up half the global economy.

And the sanctions keep coming. The United States and Britain have announced new, coordinated sanctions on a near-weekly basis, and the European Union is currently working toward a ban on all imports of Russian oil.

“The simple way of thinking about it is, Russia sells commodities — half of which are energy — and then they take those revenues to buy manufactured goods or high-tech goods,” said Gerard DiPippo, a senior fellow with the Economics Program at the Center for Strategic and International Studies. “We’re theoretically trying to cut them off on both sides. It’s harder to cut them off at the revenue source.”

Put simply, sanctions on Russia fall into four buckets. The United States and its allies keep filling each of them with new tools.

The hardest-hitting sanctions so far have targeted Russia’s most important financial institutions.

These sanctions are run out of the Office of Foreign Assets Control, or OFAC, a financial intelligence and enforcement agency based at the U.S. Treasury Department, and restrict certain or all transactions by Americans with designated entities.

The most significant designation so far was the Central Bank of Russia. In a coordinated effort, the United States, European Union and Great Britain froze virtually all of Russia’s foreign exchange reserves — essentially, its safety deposit box held in reserve for a moment of crisis — affecting all of their holdings except for Chinese currency and gold.

The United States, European Union, Britain and Canada have also compelled the ubiquitous SWIFT financial messaging system to cut off access to several major state-owned Russian banks, which effectively prevents them from conducting most financial transactions.

SACRAMENTO, Calif. — Gov. Gavin Newsom signed a bill in June banning the marketing of guns to minors in California — and felt so strongly that he issued a video of himself holding an AR-15 and standing in front of an ...Read More

LOS ANGELES — Alonzo Quintero was 11 months and 17 days old when he died after a driver crashed into several cars in a fiery wreck that killed five people in Windsor Hills on Thursday.

FORT LAUDERDALE, Fla. — Hurricane season has gotten off to a slow start over the past couple of months, but now forecasters are tracking a disturbance that could become a tropical depression by midweek, the National ...Read More

CHICAGO — Despite the urging of the state’s health department to resume school-based COVID-19 testing for students this fall, officials at several Illinois districts said this week they are halting the program due to ...Read More

BRUNSWICK, Ga. — The man who shot and killed Ahmaud Arbery was sentenced Monday to life in prison for federal hate crimes convictions involving the 25-year-old’s slaying.

The sentence for Travis McMichael is in ...Read More

SAN FRANCISCO — Despite experiencing one of the country’s largest outbreaks of monkeypox, San Francisco’s health department has pulled back on contact tracing – a standard public health practice in combating viral...Read More