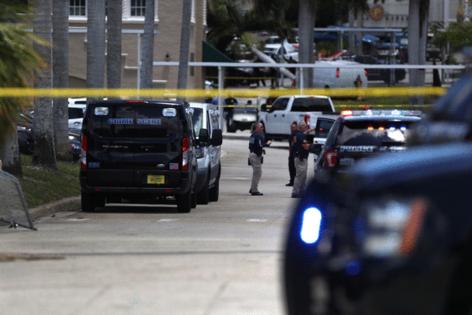 FORT LAUDERDALE, Fla. — A man drove a van through a locked chain-link gate at the school and jumped out, ran around the campus and eventually made it into a building with students and teachers inside.

Some students fled to a nearby Tri-Rail station. Some went into a business at the corner of Fern Street and South Tamarind Avenue. Others hid out in the Kravis Center for the Performing Arts for hours.

A West Palm Beach Police officer shot and killed the man, who police said was behaving erratically, inside the auditorium of Building 7 after a fight between police and the driver.

The driver was pronounced dead at the scene. No students or faculty were injured, police said. The officer is on administrative duty, as is standard procedure.

‘I thought it was fake’

The man was driving east in the westbound lanes of Banyan Boulevard before he crashed through the school’s locked gates on Tamarind Avenue, police said. The driver hit a palm tree and just missed a maintenance worker in a golf cart.