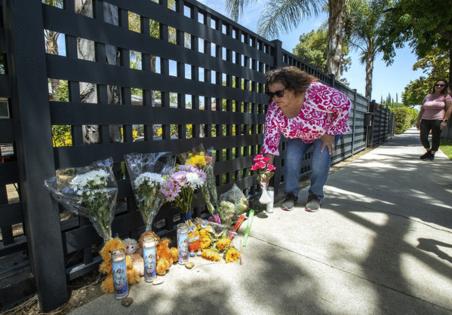 LOS ANGELES — Residents in a West Hills neighborhood were alarmed Saturday night when they saw a woman lighting candles and holding a Bible in a stranger’s yard.

Los Angeles police officers responded to the “disturbing the peace” call and found Angela Flores, 38, and determined she needed medical treatment. Paramedics arrived, and authorities said she was so agitated that she had to be strapped to a stretcher.

It turned out Flores lived next door to where she was found. But no one from either the LAPD or the Los Angeles Fire Department checked on the well-being of her children that night. Officers did not canvass the area and it would be seven more hours before police found three of Flores’ children dead in their home.

The morning after Flores was taken away — Mother’s Day — a teenage boy knocked on a neighbor’s door and said his siblings were hurt, according to Primo Canales, who lives a few houses away from Flores. The neighbor went to a home on Victory Boulevard where the boy said he lived, Canales said, found the bodies of three children and called Los Angeles police.

So police arrived again to the block seven hours later and made a grim discovery: All three children — two boys and a girl — were dead.

The series of events has raised questions about how authorities handled the case and why it took so long for them to find the children.

It remains to be seen whether the children were already dead when authorities found Flores in her neighbor’s yard. Asked whether there was a possibility the children were clinging to life when officers arrived Saturday night, LAPD Deputy Chief Alan Hamilton said he did not know and noted the medical examiner would determine what happened.

But a seal has been placed on the coroner’s findings by LAPD detectives, so details of the children’s deaths beyond their names and ages are not available. It has not been revealed how — or when — they died.

Asked to explain why officers did not determine where Flores lived when they first encountered her, LAPD Capt. Gisselle Espinoza replied: “Timelines and specifics are still under investigation and not authorized for release by investigations at this time.”

Flores is now facing murder charges in the deaths of Natalie Flores, 12; Kevin Yanez, 10; and Nathan Yanez, 8. Angela Flores, 38, claimed to believe the children were possessed by demons and repeatedly jumped on them because she thought she could drive the demons out, said law enforcement sources who were not authorized to speak publicly about the case.