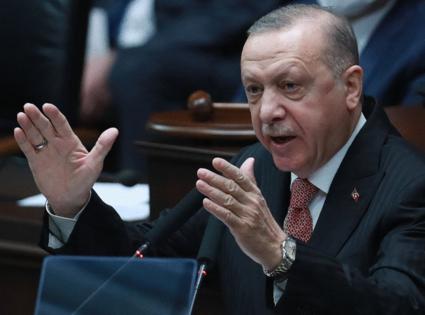 Erdogan cited concerns over the presence of “terrorists” in both countries. A senior Turkish official later said Ankara wants Sweden and Finland to take a clear stand against supporters of a Kurdish militant group that’s fighting for autonomy in Turkey’s southeast. Ankara will hold negotiations over their membership in the alliance, the official added.

Any enlargement of the North Atlantic Treaty Organization requires unanimous approval of the alliance’s members. Turkey’s been a NATO member since 1952.

“We are following developments regarding Sweden and Finland, but we are not in a positive mindset,” Erdogan said in televised remarks after Friday prayers. “Scandinavian countries are like guest houses of terrorist organizations. They even take part in their parliaments. At this point, it is not possible for us to look at it positively.”

Turkey has long complained of insufficient cooperation from NATO and European allies in its fight with the Kurdistan Workers’ Party, or PKK, which is labeled as a terrorist organization by the US and European Union.

“It’s not clear to me that Turkey is saying they will oppose” the applications, Donfried said, adding that the US will be a “strong supporter” of the bids if they are filed.

Erdogan’s move came as a surprise as Sweden had received no indication that Turkey would oppose it joining NATO, Foreign Minister Ann Linde said in emailed comments.

“The Turkish government hasn’t conveyed any message of this sort directly to us, and it hasn’t done so in the North Atlantic Council,” she said. Linde said she’d address the issue at an informal meeting of NATO foreign ministers that starts Saturday. Finnish Foreign Minister Pekka Haavisto urged patience over the process and said that he will be talking with his Turkish counterpart.

NATO Secretary General Jens Stoltenberg has repeatedly said he expects all allies to welcome the countries’ prospective membership and that the accession process would be swift.

Spokespeople for the alliance didn’t immediately respond to a request for comment.

Despite their orientation toward the U.S. and western Europe, Finland and Sweden had bet since the Cold War that their national security was best protected by staying out of NATO. They aimed to avoid disturbing the military balance in the Baltic Sea region and provoking Russia. But Russia’s invasion of Ukraine sparked a rethinking in both countries.

Turkey has sought a middle ground over the war in Ukraine. The government in Ankara has been reluctant to burn its bridges with Russian President Vladimir Putin, in part fearing a rupture would put Turkish forces deployed in Syria at risk of attack by Russian-backed Syrian government troops.

But it has supplied Kyiv with lethal Turkish-made drones and shut its straits and air space to Russian military ships and aircraft.