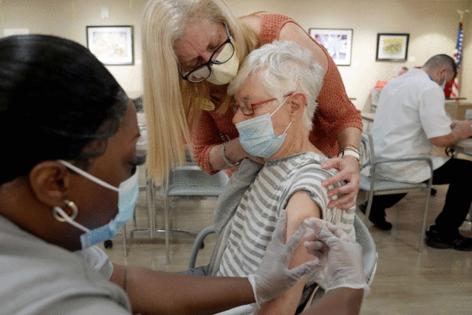 Even as top U.S. health officials say it’s time America learns to live with the coronavirus, a chorus of leading researchers say faulty messaging on booster shots has left millions of older people at serious risk.

Approximately 1 in 3 Americans 65 and older who completed their initial vaccination round still have not received a first booster shot, according to the Centers for Disease Control and Prevention. The numbers have dismayed researchers, who note this age group continues to be at the highest risk for serious illness and death from COVID-19.

People 65 and older account for about 75% of U.S. COVID-19 deaths. And some risk persists, even for seniors who have completed an initial two-dose series of the Moderna or Pfizer vaccine or gotten one dose of the Johnson & Johnson vaccine. Among older people who died of COVID-19 in January, 31% had completed a first vaccination round but had not been boosted, according to a KFF analysis of CDC data.

The failure to boost more of this group has resulted in the loss of tens of thousands of lives, said Dr. Eric Topol, founder and director of the Scripps Research Translational Institute. “The booster program has been botched from day one,” Topol said. “This is one of the most important issues for the American pandemic, and it has been mismanaged.”

He added: “If the CDC would say, ‘This could save your life,' that would help a lot.”

Although the initial one- or two-dose vaccination course is effective at preventing hospitalization and death, immunity fades over time. Boosters, which renew that protection, are especially important for older people now that COVID-19 cases are rising again, more transmissible omicron subvariants are proliferating, and Americans are dropping their masks, Topol said.

Some older people, who were prioritized for initial vaccination in January 2021, are now more than a year from their last shot. Adding to the confusion: The CDC defines “fully vaccinated” as people who have completed an initial one- or two-dose course even though a first booster is considered crucial to extending COVID-19 immunity.

Numerous studies have confirmed that the first booster shot is a critical weapon against COVID-19. A study of older veterans published in April found that those who received a third dose of an mRNA vaccine were as much as 79% less likely to die from COVID-19 than those who received only two shots.

A central question for scientists championing boosters is why rates have stalled among people 65 and older. Surveys have found politics and misinformation play a role in vaccine hesitancy in the population at large, but that’s not been the case among older people, who have the highest initial vaccination rate of any age group. More than 90% of older Americans had completed an initial one- or two-dose course as of May 8.

By contrast, 69% of those vaccinated older Americans have gotten their first booster shot.

LOS ANGELES — Los Angeles County has purchased $750,000 worth of baby formula that it will soon start handing out at food distribution sites and through outreach programs for new mothers, officials said.

Blame it on Rio.

PHILADELPHIA — In a triple shooting that left one man dead Saturday morning in East Germantown, two women leaving a church service were also hit by gunfire, according to police.

It was the second homicide of the morning...Read More

LOS ANGELES — Nearly two years after a massive wildfire tore through Big Basin Redwoods State Park in the Santa Cruz Mountains, parts of the park are set to reopen this summer, allowing visitors the opportunity to return...Read More

A New Jersey man with alleged ties to Nazism was convicted for his actions during the Jan. 6 attack on the U.S. Capitol after claiming he was unaware that Congress meets under that big dome.