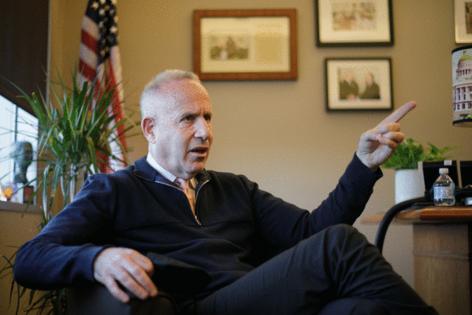 Today he attends American River College, is receiving mental health services, and lives in a new studio apartment in south Sacramento. The apartment is located in a converted motel where formerly unhoused individuals are living under the state's Project Homekey program.

"I'm very grateful to be in this program," said Newman Jr., 39, who grew up in Rancho Cordova. "I got blessed."

Sacramento Mayor Darrell Steinberg wants to open more Homekey motels and other shelters to address the city's growing homeless crisis, but he said the city needs state funding to do so. He is joining with other mayors across the state in urging Gov. Gavin Newsom and state legislators to approve additional funding to help cities address homelessness.

"Our message is this: Please extend homeless assistance programs and direct allocations to cities," Steinberg said Thursday during a press conference at the converted motel on La Mancha Way in the Parkway neighborhood. "Not just for another year but as many years as possible."

Steinberg made his appeal a few weeks before Newsom is expected to release his May budget revisions. The state Finance Department on Thursday reported tax revenue is coming $17.4 billion above the projections the Newsom administration released in January, when the governor announced that he anticipated a $45.7 billion surplus.

Newsom has prioritized homelessness throughout his administration, including allocating some $12 billion toward homelessness and affordable housing. The mayors are looking for an ongoing commitment extending past a single budget year.

The Federal Emergency Management Agency reimburses Sacramento for its expenses in leasing motels for homeless families. If FEMA does not extend that program, the city will need to find another funding source to keep the motels running beyond June 2023.

Steinberg said the city also does not have funding to open additional shelters and housing. New shelters will be needed especially if voters in November pass a ballot measure to require the city create shelter spaces for at least 60% of its homeless population. The city estimates building that capacity would cost almost $200 million.

In addition to the south Sacramento site, the city has received state funding to open Homekey motels in Natomas and downtown.

Steinberg and the other mayors are urging state leaders to approve $1 billion annually in Homeless Housing, Assistance and Prevention (HHAP) state grants every year through at least June 2026. Those grants are helping fund the Homekey motels, as well as the city's large shelters in Meadowview and along the W-X corridor, and tiny homes in North Sacramento.

"This particular project is a shining example," Dozier said.

"This was done in record time," Daues said. "We got people in within three months of us taking over."

Veada Pinkney was one of those residents who moved in about a year ago. She slept in a park in Los Angeles, then moved to Sacramento to stay with a cousin, but when that didn't work out, she found herself still homeless. She teared up during the press conference as she thanked the Hope Cooperative staff, whom she calls her family.

"You guys gave me an opportunity when I was losing hope," Pinkney, 49, said. "I want to be a productive citizen of society and you guys gave me that."

Since moving into the motel, she was able to get a drivers' license, a car, and a job working at a nearby gas station, she said. She received a housing voucher, which she hopes to use soon to move into a house, she said.

"I haven't been this happy in my life in a long time," she said.